The 2010 election campaign is drawing to an end with money playing a greater role than ever. The January 21, 2010 US Supreme Court decision in Citizens United v. FEC opened the way for more campaign spending on TV commercials by corporations and labor union. The Center for Responsive Politices predicts that by Election Day on November 2, this year’s midterm elections for the House, Senate, and state governors will have cost nearly $4 billion. The Public Campaign Action Fund estimates that combined House and Senate candidate fundraising and spending will near $2 billion, an average of more than $4 million for each of the approximate 470 open seats. This Wordle visual map of campaign cash used words from 10 articles by Media Consortium members on the topic published from October 25-29. 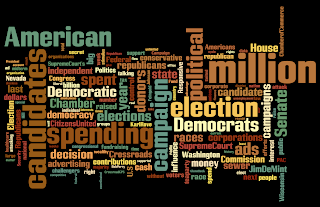 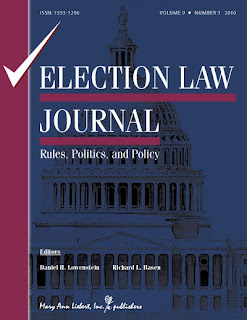 Whether the voting public has learned any lessons from all this spending is questionable as this year’s campaign has been more entertainment than education. In its collection, the Brooklyn Law School Library has the latest issue of the Election Law Journal, Vol. 9, No. 3 (2010) (Call #K5 .L33) with Should Election Campaigns Be Deliberative? by Joseph Bessette.

The article is a book review of What are Campaigns For? The Role of Persuasion in Electoral Law and Politics by James A. Gardner (Call #JK2281.G37 2009) in which the author states that campaigns do not shape public opinion but instead measure it and that election campaigns are “inadequate, undignified, and beneath not only our aspirations but also our capacity as a democratic people seeking to shape our own collective destiny in the world.” The book is an historical account of public participation in the electoral process in the US. The history dates from the early 18th Century when people were “incompetent to evaluate either public policy or the job performance of hierarchically superior government officials” to the Progressive Era of reform from the 1890s to the 1920 when candidates campaigned openly for office and sought to persuade voters of the wisdom of their principles and policies.
The increase in fundraising and spending in election campaigns is significant. The real test of democracy is voter turnout. The New York City Board of Elections has an online Poll Site Locator to find polling places throughout the city. Polling Places are open on Election Day 6:00am to 9:00pm. In addition to choosing Senators, Representatives, Governor, and Attorney General, voters have a choice on two citywide ballot questions approved by the New York City Charter Revision Commission. The questions appear on the back of the ballot. Question 1 is on restoring a limit of two consecutive terms for Mayor, City Council member, Public Advocate, Borough President and Comptroller. Question 2 has seven subparts on Elections and Government Administration. See the 2010 Ballot Questions here.