In time for Halloween, the first floor library display case has a number of books from the library collection on the Salem Witch Trials and earlier trials of witches in England. Brooklyn Law School Associate Librarian Linda Holmes has included these items:

Witch-Hunting In Seventeenth-Century New England: A Documentary History 1638-1693 edited by David D. Hall (Call #BF1575 .W62 1999), a collection of court depositions and excerpts from the diaries and letters of contemporaries on witch-hunts seen through the eyes of the accusers, the victims, abd the judges revealing the emotions in communal life and family relationships within New England’s small towns and villages. 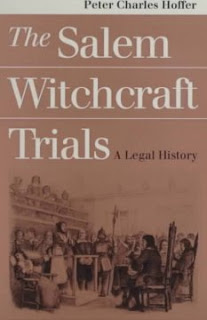 The Salem Witchcraft Trials: A Legal History by Peter Charles Hoffer (Call #KFM2478.8.W5 H645 1997), an examination of the Salem witch trials where the author shows how rights we take for granted today did not exist in colonial times and also demonstrates how these cases relate to current instances of children accusing adults of abuse.

Witch-Children: From Salem Witch-Hunts to Modern Courtrooms by Hans Sebald (Call #BF1576 .S43 1995), a study of the participation of small children and adolescents in witch trials, whether as the accused or as the accusers, determining the fates of many unsuspecting men and women. The author maintains that the classic “Salem syndrome” is not mere past history but often reenacted in modern courtrooms where children accuse others of molesting or seducing them, with or without satanic ritual, with a public mind-set predisposed to believe them.

A Trial of Witches: A Seventeenth Century Witchcraft Prosecution by Ivan Bunn and Gilbert Geis (Call #KD371.W56 G45 1997), a case study of the witchcraft trial of two women in 1662 Lowestoft, England, including a description of the accusers and prosecutors and an analysis of the trial itself, which was cited as a precedent in the Salem witchcraft trials.

Witchcraft & Witch Trials: A History of English Witchcraft and its Legal Perspectives, 1542 to 1736 by Gregory Durston (Call #KD371.W56 D87 2000), a book of scholarship showing that the English persecution of witches was overwhelmingly a secular legal phenomenon, rather than the result of popular or ecclesiastical action.

Witchcraft in England, 1558-1618 by Barbara Rosen (Call #BF1581 .W79 1991), a rare collection of documents – pamphlets, reports, trial accounts, and other material – that describes the experience, interpretation, and punishment of witchcraft in the late sixteenth and early seventeenth centuries.