With the mortgage crisis spreading throughout the country, major news stories have been reporting on flawed foreclosure paperwork that the nation’s largest banking institutions have allegedly used courts nationwide. Employees of these institutions – “robo-signers” – have submitted misleading affidavits to the courts saying they had examined documents when in fact they had not examined them. In an effort to address the issue earlier this month, the Congress passed H.R. 3808, the Interstate Recognition of Notarizations Act of 2010. The bill did not become law as the President withheld approval of the bill citing The Pocket Veto Case, 279 U.S. 655 (1929). A Presidential Memorandum of Disapproval explained the possible unintended impact on consumer protections as the basis for the pocket veto.

Locally, the issue of robo-signing and flawed foreclosure filings has drawn the attention of Brooklyn State Supreme Court Judge Arthur Schack. This week, in Onewest Bank, F.S.B. v Drayton, 2010 NY Slip Op 20429, Judge Schack ruled that the bank, which relied on an admitted “robo-signer” to transfer the $492,000 mortgage on the pro se defendant’s East New York home, failed to prove it owned the property in question. “To prevent the waste of judicial resources, the instant foreclosure is dismissed without prejudice,” Schack wrote. The decision is the latest of several that have turned Judge Schack into a hero of troubled homeowners across the nation.

This video from the October 14 edition of PBS NewHour features Judge Schack and others discussing the flawed foreclosure paperwork that has led attorneys general in every state and the District of Columbia to launch a joint investigation into the issue and to a temporary halt by banks in foreclosure proceedings. 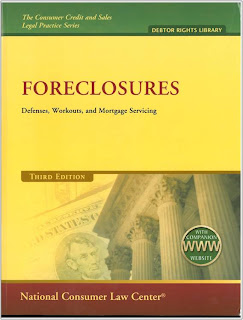 The Brooklyn Law School Library has in its collection the recently published third edition of the National Consumer Law Center’s Foreclosures: Defenses, Workouts, and Mortgage Servicing by John Rao (Call #KF697.F6 R3 2010) described as the best book for in-depth legal research on the subject of foreclosure. The related library record links to the book’s companion website for which the publisher has a description here.