This week the NY Times published an intriguing article on the resolution of a four year legal battle over ownership of personal property, silver Torah ornaments called rimonim, used in worship services in the nation’s oldest existing synagogue, Touro Synagogue in Newport, RI.  Judge John J. McConnell, Jr of the US District Court for the District of Rhode Island issued a 106 page opinion in favor of Congregation Jeshuat Israel, worshippers at the 252-year-old Touro Synagogue in Newport who have been battling Shearith Israel in New York City for control of the temple and the right to sell a pair of historic ceremonial ornaments worth millions of dollars. The suite was originally filed in Rhode Island Superior Court, Newport County, in November 2012 and later removed to federal court. Judge McConnell’s opinion begins;

Bricks and mortar of a temple, and silver and gold of religious ornaments, may appear to be at the center of the dispute between the two parties in this case, but such a conclusion would be myopic. The central issue here is the legacy of some of the earliest Jewish settlers in North America, who desired to make Newport a permanent haven for public Jewish worship. Fidelity to their purpose guides the Court in resolving the matters now before it. 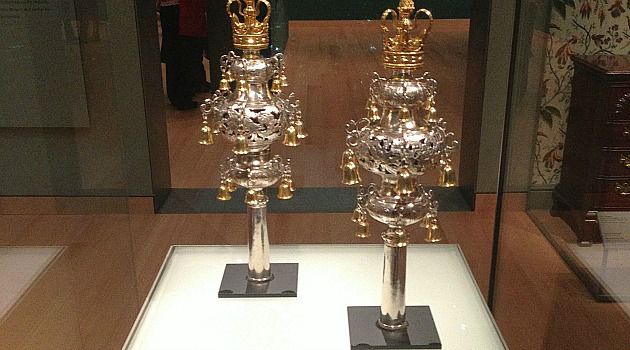 Touro Synagogue was established in 1763. During and after the Revolutionary War, most of the Newport’s Jewish residents moved away, many of them to New York. By the 1820s, no Jews were left in Newport, and Congregation Shearith Israel became Touro’s trustee. The two congregations began to feud when the Touro congregation tried in 2012 to sell the bells made by a noted 18th-century silversmith, Myer Myers to the Museum of Fine Arts in Boston for $7.4 million to improve the synagogue’s fiscal health. The New York congregation protested and Congregation Jeshuat Israel filed the lawsuit. Since, the museum withdrew the offer leaving the dispute to be decided by the federal court.

Touro Synagogue has become a national historic site drawing visitors from all over the world every year. Its most famous visitor was the nation’s first president George Washington who in 1790, stopped at Touro. After his visit he sent the congregants a letter saying the government of the United States “gives to bigotry no sanction, to persecution no assistance.” It is considered an important pledge of the new nation’s commitment to religious liberty. A search of Brooklyn Law School Library’s ProQuest Congressional database, available to members of the BLS community, will lead to 107 H. Con. Res. 62 dated July 17, 2001. The title of the resolution is “Expressing the Sense of Congress That the George Washington Letter to Touro Synagogue in Newport, Rhode Island, Which Is on Display at the B’nai B’rith Klutznick National Jewish Museum in Washington, DC, Is One of the Most Significant Early Statements Buttressing the Nascent American Constitutional Guarantee of Religious Freedom”.