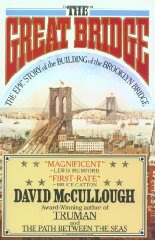 A Brooklyn Eagle article called On This Day in History: May 24 The Brooklyn Bridge Opens notes the anniversary of the iconic landmark. The history of the bridge’s construction is told in The Great Bridge: The Epic Story of the Building of the Brooklyn Bridge by David G McCullough (Call #KFX2071 .M138) located in the Brooklyn Law School Library’s NY Collection. Aside from telling the history of the bridge and its builders, McCullough has written about what New Yorkers were thinking at a time when the era of skyscrapers was decades away. With the rapid growth in population after the Civil War, Manhattan was choked with lowrise tenements, warehouses and factories. The need for a reliable means to get to the vast open spaces of Brooklyn was urgent. It was not the horizontal which amazed witnesses to the constructionof the bridge but rather the height of the towers and roadway over the East River.

McCullough relates that “A bridge over the East River, joining the cities of New York and Brooklyn, had been talked about for nearly as long as anyone could recall . . . the idea for the bridge was exactly as old as the century, the first serious proposal having been recorded in Brooklyn in 1800.” He goes on to say that “Most appealing of all for the Brooklyn people who went to New York to earn a living every day was the prospect of a safe, reliable alternative to the East River ferries.” It is hard to imagine life in New York City without the Brooklyn Bridge.

The great poet, Walt Whitman, who lived and worked in Brooklyn part of his life and had a lifelong interest in the independent city of Brooklyn, described in his poem Crossing Brooklyn Ferry what it must have been like before the building of the bridge.

Crowds of men and women attired in the usual costumes! how curious you are to me!
On the ferry-boats, the hundreds and hundreds that cross, returning home, are more curious to me than you suppose;
And you that shall cross from shore to shore years hence, are more to me, and more in my meditations, than you might suppose.

On the subject of Whitman, a recent post on Due Process: the Georgetown Law Library Blog states that he “worked as a clerk in the Attorney General’s office from 1865-1873. The National Archives announced that it has recently discovered 3,000 documents relating to Whitman’s work in Washington, DC. The documents were found by Kenneth M. Price, a professor of English and co-director of the Walt Whitman Archives. The find illuminates not only this moment in American history, but what might have shaped the thoughts of Walt Whitman as well.” 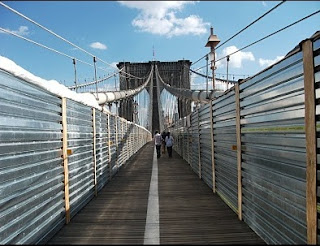 Sadly, today corrugated metal walls blockthe magnificent vistas from the Brooklyn Bridge. Installed as part of a $508 million rehabilitation project designed to double the capacity of two ramps and to replace rotting pavement, they will remain until 2014. The NYC DOT website says that the project is partially funded by the American Recovery and Reinvestment Act.