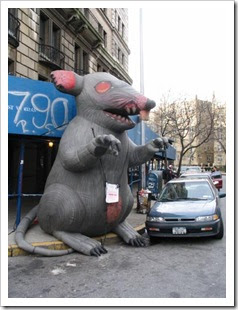 In New York City, inflatable rat balloons are commonplace signs of labor disputes where unions picket work sites using non-union workers. Whether the rat balloon is a form of picketing that is illegal under Section 8(b)(4)(ii)(B) of the National Labor Relations Act has been unclear. That provision makes it illegal for anyone to threaten, coerce, or restrain any person engaged in commerce or in an industry affecting commerce. A new NLRB ruling in Sheet Metal Workers International Association, Local 15, AFL–CIO and Galencare, Inc., d/b/a Brandon Regional Medical Center and Energy Air, Inc. states that the display of an inflatable rat does not violate Section 8(b)(4)(ii)(B).
The case began in 2003, when union members mounted an inflated rat balloon on a flatbed trailer and positioned the trailer on public property in front of the hospital worksite where the employer hired Workers Temporary Staffing (WTS), a labor supply company, to provide employees for the project. The rat balloon measured about 16-feet tall and 12-feet wide, and had a sign captioned “WTS” attached to the rat’s abdomen. In 2006, the Board issued a decision ruling that a mock funeral staged by the union in front of the hospital was unlawfully coercive. Now, the Board has ruled on the display of the inflatable rat balloon.

The Board relied on First Amendment principles in its ruling citing the US Supreme Court’s decision in Snyder v. Phelps, 562 U.S.__ (March 2, 2011), which affirmed First Amendment protection of picketing by church members of a military funeral, adjacent to a public street, with placards communicating the members’ belief that God hates the United States for its tolerance of homosexuality.Two years ago, the New Jersey Supreme Court in State v. DeAngelo, 197 N.J. 478 (2009), struck down a municipal ordinance which banned the use of inflatable balloons, as well as banners and streamers, except in connection with grand openings. The court said the ban was not “content-neutral” since it allowed balloons to be used in one circumstance, grand openings, while prohibiting them in others, including union-related disputes.

The Brooklyn Law School Library maintains a series of research guides one of which by Librarian Jean Davis, the Administrative Law Research Guide, notes that behind the BLS firewall, researchers can access components of the CCH Internet Research Network for the NLRB Case Handling Manual. A record for the Manual is included in the library’s catalog SARA which links to the Westlaw Database Identifier CCH-NLRBCHM.