Two recent high profile cases involve the subject of judicial recusal. The first is the request by Common Cause that the Justice Department investigate whether US Supreme Court Justices Antonin Scalia and Clarence Thomas should have recused themselves from participating in Citizen’s United v. FEC because they attended conferences organized by interest groups who benefited from the ruling. The second is the motion by proponents of California’s Proposition 8 to overturn now retired Chief U.S. District Judge Vaughn R. Walker’s decision last August declaring Proposition 8 to be an unconstitutional violation of gay Californians’ civil rights based on a possible personal benefit to him from his ruling because of his own sexual orientation. Linda Greenhouse’s NY Times piece Recuse Me states that recusal motions are becoming the latest weapon in the litigator’s arsenal, in effect a substitute for legal argument. As Greenhouse states, the standard for judicial recusal is in Section of 28 USC §455(a) which provides that “any justice, judge or magistrate judge of the United States shall disqualify himself in any proceeding in which his impartiality might reasonably be questioned.” 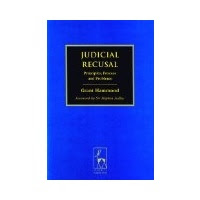 The Brooklyn Law School Library has in its International Collection Judicial Recusal: Principles, Process and Problems by Grant Hammond (Call # K2146 .H364 2009). Chapters, some of which relate to federal recusal law in the US, include: The essential questions — The evolution of the present law in the common law world — The classification of the present day recusal principles in the British Commonwealth — Automatic disqualification in the British Commonwealth — Apparent bias in the British Commonwealth — Federal recusal law in the United States of America — The importance of process — Prudence : if in doubt, out? — Practical rules and protocols — Disclosure — Waiver — Necessity — Appellate review of lower court decisions — Recusal procedure in appellate courts — Judicial misconduct in court : judges who go too far — Prior viewpoints — Unconscious bias — Possible reforms — Judges or legislators?

Another resource at the BLS Library is Judicial Disqualification of Judges: Recusal and Disqualification of Judges by Richard E. Flamm (Call # KF8861 .F53 2007), a comprehensive 1,185-page guide to the case law, statutory law and court rules which govern motions to recuse and disqualify judges in every American jurisdiction and an exhaustive source of precedents, analysis and procedural guidance with every legal basis for judicial disqualification, from the common law and constitutional provisions to state and federal statutes and court rules.