Today’s post updates the one here about the law library in Buenos Aires with news that he met today not only with law library personnel at the Facultad de Derecho of the University of Chile in Santiago but also with a distinguished alumnus of the law school and an American law professor on the campus for a visit. Caroline Maulin, Law Librarian, who led the tour of the Biblioteca on behalf of Director Nora Carrion, explained that because of Chile’s smaller population, as compared to Argentina, the law school in Santiago is much smaller than the one in Buenos Aires. Here the school has about 1,300 law students who study law over a period of five years and students are required to complete three major components to earn a degree: a practicum, a thesis and an examination. For more detailed reading on the subject, see Antonio Bascunan Valdes, Legal Education in Chile, 43 S. Tex. L. Rev. 683 (2001-2002) in HeinOnline available to BLS law school community on the Library’s A-Z List of subscription databases. Caroline explained that there were two libraries at the University, the central library for most of the law students and another for the exclusive use of post grads. 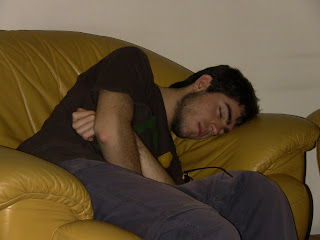 While the tour was in progress, the law students at the University of Chile were in the middle of their final exams which take place in December and January just before the summer recess. The photo here shows that whatever differences there are in legal education in Chile and the US, law students have one thing in common: exhaustion.

The library collection consists of about 50,000 print volumes of which about 6,000 are on reserve and about 3,300 are reference material. The collection also contains more than 14,000 theses completed by graduate and post graduate students as well as more than 650 legal periodicals, mostly from South America but also from North America and Europe. There is also a special collection of about 19,000 volumes that is one of the most valued in the country especially its historical collection. Chileno law students, like their Argentine counterparts, have access to electronic databases without charge only in the law library.

Also in attendance on the tour was Daniel Friedenzohn, J.D., M.A., Assistant Professor of Law who teaches Aviation Law at Embry-Riddle Aeronautical University in Daytona Beach FL. The alumnus responsible for the tour was Guillermo Aguero, who earned his law degree from the University of Chile thirty years ago and a graduate law degree in labor law a dozen years ago. Aguero is now a member of the municipal council of Ciudad Santiago and discussed the upcoming presidential run-off election in Chile between the two candidates who received the most votes on December 13 — center-right Sebastián Piñera and center-left Eduardo Frei Ruiz-Tagle. The run-off will be held on January 17 with the winner to replace President Michelle Bachelet, the first woman to hold the position in the country’s history. She won the 2006 presidential election in a runoff and is ineligible to run for a second consecutive term under Chilean law.