Today is one of a number of days in December and througout the year when students from the University of Buenos Aires (UBA) School of Law (Facultad de Derecho) take part in graduation ceremonies. UBA is the largest university in Argentina and the largest university by enrollment in Latin America. The BLS Library Blog was present to witness the awarding of dipolmas to the more than 200 law students along with their family and friends. The reason there are several graduation ceremonies is that the student body at the Facultad de Derecho consists of 35,000 students who study over a period of 7 years, according to Silvia Abadal, Vicedirectora of the Biblioteca Central at UBA who gave me a tour of the law school and the library on behalf of the Director, Corrina Tiribelli.

The ceremony took place in the Aula Magna under a magnificient painting of the founding of the UBA in 1825. In attendance were professors who provide legal instruction as part of a faculty of 3,000 members under the leadership of the Dean, Atilio Anibal Alterini, el Decano de la Facultad de Derecho.
Vicedirectora Abadal led a tour of the library which contains 300,000 volumes along with about 3,000 legal periodicals mostly from Latin America but also many international legal periodicals including several from the US. At this time, there are none from Brooklyn Law School. One item of interest is that legal periodicals at UBA are not operated by student run organizations but rather by the faculty. There are many other differences in legal education in Argentina. For example, besides the 7 year course of study, most student take three courses per quarter during two quarters per year and attend class about 6 hours per week. The basic law degree comes at not cost to the students as it is paid for by the State. The doctoral degree is very costly. Most students live off campus, as there are no university dorms, and nearly all students are full time employees while attending law school. The library is able to provide students with free access to legal databases but only in a designated room operated by the two major legal database publishers, La Ley and Lexis. Students have to pay for off campus access as the cost of providing access off campus to so many students is prohibitive.
In addition to electronic databases, the library´s print collection is housed in two large rooms, a circulation room and a Reading Room (la Sala Silenciosa) which can accommodate less than 500 of the student body. Our tour of the library took place when it was closed and no students were using it as final exams took place in the past two weeks. With the closing the library, law students working for the library were engaged in an annual inventory of the collection. With my limited Spanish language skills, I was able to communicate with some of the student workers, who, while not fluent in English, were able to communicate with me. Most of the students with whom I spoke were about half way through their studies and had not yet decided their area of interest. Grading is on a scale of 1 to 10 with the average grade at 5. The library student workers I met were above average students with a grade of 7 and planned to pursue a graduate law degree depending on the availability of money from family or jobs as financial aid and student loans are not common in Argentina. 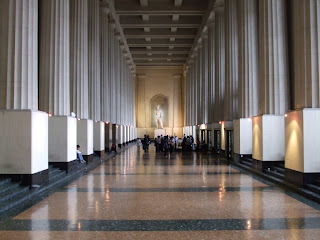 The classrooms in the enormous building total about 140 most of which have about 40 seats each. That helps explain the limited class time for most students and the length of study over 7 years. On leaving the vast entry hall, I had to work my way through the enormous crowd of family and friends of the graduates. The school will close for the month of January although there will be summer courses beginning the following month.