Each year, the American Bar Association, Section of Litigation publishes thousands of books to enhance trial practice skills of lawyers and law students on subjects from evidence to discovery to client privilege and skills for the examination of witnesses at trial and in discovery. The Brooklyn Law School Library collection has many of these titles that aspiring trial lawy 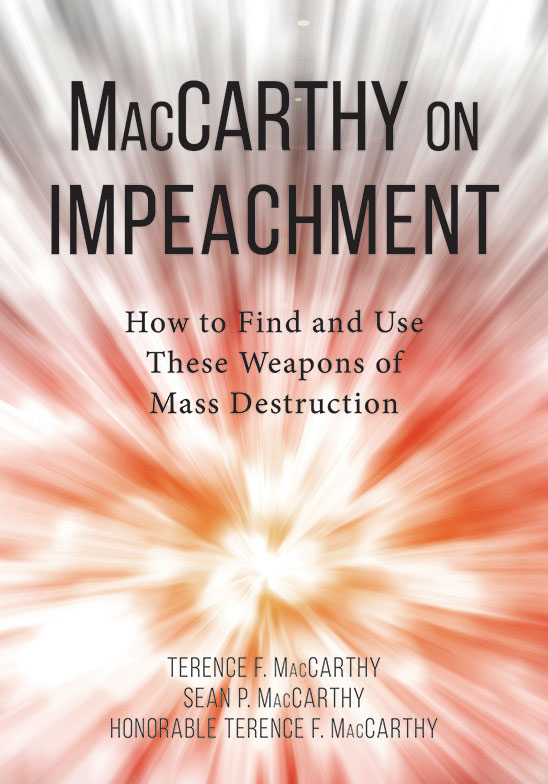 ers can review before starting the practice of law. The latest acquisition, MacCarthy on Impeachment: How to Find and Use These Weapons of Mass Destruction (Call No. KF8950 .M33 2016) by Terence F. MacCarthy, Executive Director of the Federal Defender Program in the U.S. District Court for the Northern District of Illinois and his two sons, is a relatively short 172 page volume that explores in detail impeachment of witnesses, which the author defines as cross-examination on “matters affecting the credibility of the witness” or “that which challenges veracity”. Impeachment is often used to show that the witness is, at worst, a liar, a difficult task that requires the cross examiner to go for the jugular. An easier goal of impeachment is to show that a witness is mistaken. Another type of impeachment discussed in the book is motivation or bias impeachment the constitutional dimension of which was firmly recognized in Davis v. Alaska, 415 U.S. 308 (1974).

There are many books on evidence and trial advocacy, including MacCarthy on Cross Examination (Call No. KF8920 .M326 2007) by the same author, but little specifically on impeachment. It is one of the most confusing and misunderstood parts of the trial for both trial lawyers and judges. Just as cross examination is the most difficult of trial skills, impeachment, usually a part of cross examination, is even more difficult. Many trial lawyers do not know what they can or cannot do to impeach. This new title offers trial lawyers “weapons of mass destruction” with instruction on how to use them. This groundbreaking work is an indispensable resource for trial attorneys seeking to improve their skills and better serve their clients.

The book discusses sixteen ways to impeach a witness in sixteen chapters, the last two of which deal with expert witnesses. Some chapters include citations to the Federal Rules of Evidence in parentheses. The chapter are:

At the end of the volume is a useful list of MacCarthy’s Rules of Trial Advocacy including these sample admonitions: