Law students often write lengthy papers and exams answers believing more is better. But readers, including both law professors and judges, take brevity seriously. See for example the case of Mylward v. Weldon, 21 ER 136 (1596), where the Chancery Court of England punished an aspiring lawyer and ordered that a pleading 120 pages long be removed from the file because it was about eight times longer than it needed. He ordered the pleader be taken to the Fleet prison and that on the next Saturday the Warden of the Fleet bring the pleader into Westminster Hall at 10 a.m. and then and there cut a hole in the midst of the pleading and place it over the pleader’s head so that it would hang over his shoulders with the written side outwards. The Warden had to lead the pleader around Westminster Hall while the three courts were sitting and display him “bare headed and bare faced” and then be returned to the Fleet prison until he had paid a £10 fine – a huge sum in those days.

The complete text is available in a facsimile at this link. This tale of the bareheaded lawyer gives legal writers a vivid image of what not to do. The Second Circuit, citing the case in Varda, Inc. v. Insurance Co. of North America, 45 F.3d 634 (2d Cir. 1995), stated that the plaintiff’s brief “stirs nostalgia for the rigors of the common law.” 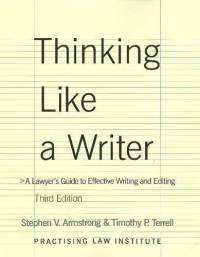 The Brooklyn Law School Library has in its reserve collection Thinking Like A Writer: A Lawyer’s Guide To Effective Writing And Editing by Stephen V. Armstrong and Timothy P. Terrell (Call #KF250 .A76 2009) which consists of six parts including Chapter 10 – Words: Precision and Brevity. The book has exercises, examples, and writing do’s and don’ts, and gives step-by-step instruction on the specialized techniques to draft clear and persuasive legal documents.