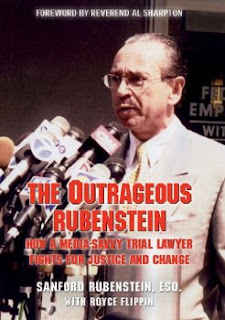 The current BLS Library New Book List has listed many titles including The Outrageous Rubenstein: How a Media-Savvy Trial Lawyer Fights for Justice and Change by Sanford Rubenstein, a memoir of Brooklyn Law School graduate Sanford (“Sandy”) Rubenstein, Class of 1971. He proudly describes the arc of his career as “from the projects to the penthouse.” A famed civil rights attorney, Rubenstein handled some of New York’s most famous cases, from that of police torture victim Abner Louima for whom he won an $8.75 million settlement from New York City and the Patrolmen’s Benevolent Association to the case of unarmed African immigrant Ousmane Zongo, mistakenly gunned down by police in a Manhattan storage facility leading to a wrongful death suit in which the City of New York agreed to pay $3 million to his family. The book also tells the story of an 11-year-old boy, Vasean Alleyne, killed by a drunken driver. His death sparked legislation toughening DWI penalties.

The book has portraits of his late colleague Johnnie Cochran, his friend and client Reverend Al Sharpton, and other giants of the legal and civil rights community. In less than 200 pages, the covers five cases that probably have enough detail to be the content of a single book each. For academics attempting to understand the inside story on fighting civil rights, or law students trying to find material to demonstrate the importance of the media in making cases work, this book is worth reading. Rubenstein’s approach to fighting difficult cases is something worth studying. The website for his law firm, located near BLS, provides addtional details about the cases.

Flamboyant, outspoken, and committed to social justice, Rubenstein offers an inside look at his methods and motivation. “My hope and goal,” he writes, “is to use the power of our civil justice system to help create a safer and more equitable society for everyone.” In the preface, he writes:

There’s been a lot of talk lately about how civil lawsuits are hurting America. Jury awards are being blamed for everything from rising medical costs to corporate bankruptcies, and right-wing politicians are trumpeting the need for “tort reform,” such as financial caps on medical malpractice lawsuits. Trial lawyers are now held up as the new villains, responsible for everything that’s wrong with our nation. . . [T]he ability of an average person to pursue a civil case – to bring a suit against an individual, a corporation or other group, or a government entity, and have his or her case heard by a jury of fellow citizens – is one of the most important rights we have as Americans. The U.S. civil justice system levels society’s playing field, by giving ordinary people a means of fighting back when they’ve been wronged.