Today marks the 150th anniversary of the start of the Civil War, when the Confederates began the bombardment of Fort Sumter at 4:30 in the morning on April 12, 1861. After secession by seven Southern states, South Carolina demanded that the US Army abandon its facilities in Charleston Harbor. The Union Army commanding officer refused to surrender. The bombing lasted into the following day with New York native General Abner Doubleday (of early baseball fame) firing the first shot in defense of the fort. However, the Union Army, unable to defend the fort, surrendered and ordered an evacuation. On April 15, President Lincoln officially declared the state of insurrection when he issued Proclamation 80 – Calling Forth the Militia and Convening an Extra Session of Congress to help squash the rebellion “too powerful to be suppressed by the ordinary course of judicial proceedings.”

Another notable Union outpost in the Confederacy was Fort Monroe located near Hampton Roads, Virginia at the mouth of the Chesapeake Bay. The NY Times Magazine article How Slavery Really Ended in America by historian Adam Goodhart is a fascinating story about three slaves seeking refuge at the fort. It was there that slavery first ended in America, not by the courage of Lincoln, other politicians or Abolitionists but by the unusual expertise of a lawyer pressed into military service providing the legal argument that would free not only the three men, but an entire nation of slaves. 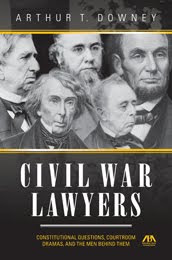 The Brooklyn Law School Library has in its collection Civil War Lawyers: Constitutional Questions, Courtroom Dramas, and the Men Behind Them by Arthur T. Downey (Call #KF366 .D69 2010) a comprehensive look at the role of the law–and of lawyers–during the Civil War. Great Constitutional issues were addressed by the Supreme Court in tense courtrooms where individual lives were at stake. Presidents struggled with the legality of their actions, including questions on habeas corpus and military commissions that still have relevance today.

The American Bar Association, publisher of the book, says that many of the lawyers prominent during the Civil War period were not only aware of each other professionally, but they had also tried cases with and against each other before the War. Jey members of Lincoln’s cabinet and diplomatic appointees were lawyers. So too were the five men who attended the Hampton Roads Peace Conference in February 1865 with Lincoln to prevent the outbreak of War. The book’s appendix contains more than 100 biographies of the lawyers of the time, a look at the cases in which the lawyers crossed paths before the War, a detailed timeline of Civil War events, and period photos and editorial cartoons.