Today marks the 202nd anniversary of Abraham Lincoln’s birth on February 12, 1809, in Hardin County, Kentucky. March 4 will mark 150 years since Lincoln first took the oath of office as president and delivered his first inaugural address. The speech was directed to the people of the South and the seven states that had declared their secession from the United States before Lincoln took office. The state and dates of secession were:

Denouncing secession as anarchy and hoping to avoid the coming conflict, Lincoln closed the address with this famous plea: “I am loathe to close. We are not enemies, but friends. We must not be enemies. Though passion may have strained it must not break our bonds of affection. The mystic chords of memory, stretching from every battlefield and patriot grave to every living heart and hearthstone all over this broad land, will yet swell the chorus of the Union, when again touched, as surely they will be, by the better angels of our nature.” 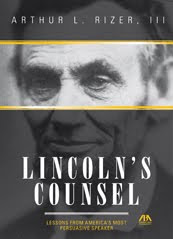 As a lawyer, Lincoln knew how to craft successful closing arguments. In the Gettysburg Address, perhaps the greatest closing argument in history, Lincoln showed that he knew how to persuade a bitterly divided country into ultimately doing what was right for all. The short 200 page book, Lincoln’s Counsel: Lessons from America’s Most Persuasive Speaker by Arthur L. Rizer, III (Call #KF368.L52 R59 2010) in the Brooklyn Law Library collection, has examples from Lincoln’s great speeches and closing arguments. The book instructs in the art of persuasion by providing lessons from Lincoln’s career as a lawyer and politician, and by analyzing those lessons and discussing how to apply them. The appendix has Lincoln’s First and Second Inaugural Speeches, the Gettysburg Address, the Emancipation Proclamation and the Cooper Union Speech.

In Chapter 7, The Greatest Closing Argument Ever Made: The Gettysburg Address, the author states “Even today, brevity in closing arguments isn’t universally appreciated. If an attorney gave a three-minute closing argument, he may be sued for malpractice. Despite this, with the Gettysburg Address, Lincoln used his skills as a persuasive litigator to breathe life into a cause that was costing so much human life. The speech was more than simple dedicatory remarks for a memorial site. He set out a position that advocated why his position was correct, much as a lawyer does in making a closing argument, and he did it quickly and beautifully.”