The Middle Class Tax Relief Act of 2010 has become the Tax Relief, Unemployment Insurance Reauthorization and Jobs Creation Act of 2010. Despite objections across the political spectrum, the House and Senate are likely to pass the compromise tax bill. The complexities of the compromise make assessing its wisdom difficult. To make the task a little easier, Brooklyn Law School Professor of Law Bradley Borden wrote The Prince and the Paupers: A Tax Fable to explain the current tax system to his daughter. The article addresses the fairness of the tax system ending with Brad’s daughter asking the unanswered question “Why don’t more people tell Congress to change the tax law?”

The BLS Library has a number of items in its collection dealing with the inequities of the tax code. See for example Perfectly Legal: The Covert Campaign to Rig Our Tax System to Benefit the Super Rich–and Cheat Everybody Else by David Cay Johnston (Call # HJ2362 .J64 2003) with these chapters: Taxes: they’re not for everyone — A nickel an hour more — Rich get fabulously richer — Big payday — Plane perks — When the old man is dead and buried — Stealth tax — How social security taxes subsidize the rich — Preying on the working poor — Handcuffing the tax police — Mr. Rossotti’s customers — For want of a keystroke — Mr. Kellogg’s favorite loophole — Mass market tax evasion — Getting off the hook — Profiting off taxes — Profits trump patriotism — Letters to Switzerland — Gimme shelter — Only the rich deserve a comfortable retirement — Is reform possible?
In order to promote understanding of complex federal budget information, the National Priorities Project (NPP) makes the topic transparent and accessible so people can prioritize and influence how their tax dollars are spent. The cost of war is a major component of federal spending as shown in this counter from NPP:
See more in the Congression Research Service report The Cost of Iraq, Afghanistan, and Other Global War on Terror Operations Since 9/11.
This chart shows total spending for the years 2010 and 2011: 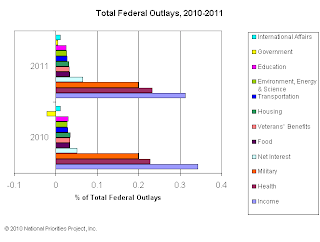