This pod cast features Brooklyn Law School Cataloging Librarian Jeff Gabel. Jeff joined Brooklyn Law School in July 2006. His principal areas of responsibility include contributing to the development of the school catalog and managing the Law School’s e-resources. His publications include “Grammatical Noun Cases for Non-Linguists: Bibliometrics Applied to a Subset of the Literature on Finnish Linguistics,” in Collection Management, “Improving Information Retrieval of Subjects through Citation-Analysis” in Knowledge Organization (presented at the Ninth International ISKO Conference, Vienna, July 5-7, 2006), and “Visualizing Similarity in Subject Term Co-Assignment” (presented at the 2009 Vancouver ASIS&T Annual Meeting). 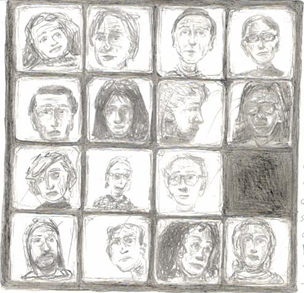 Besides his work at the BLS Library, Jeff discusses his art work for which he recently won the Eight Cuts Gallery Prize for the best literature of 2010. This high recognition is an online literary prize discussed in more detail at the Eight Cuts website “a space to bring writers to readers and readers to writers in the most exciting way possible”. The site recognizes Jeff’s blog (called Thomas Stolperer) and says that his August 12, 2010 post, Small Slidable Plastic Tiles, may be the best thing on the whole internet. Jeff talks about his Facebook page (sign in required) for Thomas Stolperer which he developed from a character in a book by Carl Zuckmayer. The Spencer Brownstone Gallery in New York has shown Jeff’s art work which led to a Critic’s Choice designation in Art Forum. The Village Voice also featured an article Meet Jeff Gabel’s Sad-Sack Antiheros.