Just before Labor Day 2010, Crain’s New York Business looks at the state of unions in New York and the nation. An article by Greg David, Unions in New York: a Labor Day Update, says that unions remain strong in New York but in the rest of the country they do not. New York remains the most unionized state in the country with almost twice the percentage of workers organized as elsewhere in the country. Last year, members of unions comprised 25.2% of the workforce in the New York State. New York has been the most unionized state in the nation for years except for 2006, when Hawaii bested New York by a third of a percentage point.

This chart, compiled from data maintained by the Bureau of Labor Statistics, shows the comparison of union membership as a percentage of all workers in the US as compared to New York. 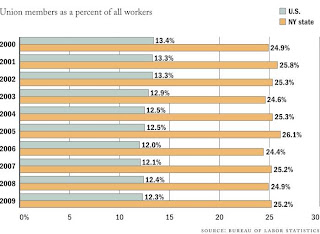 Nationally, unions now represent only 12.3% of workers and that number has declined over the last 10 years. According to a Press Release from the U.S. Census Bureau, the number of unionized public sector workers outnumbered the number of organized private sector workers in 2009, the first time that has happened. Highlights from the 2009 data include these items: