The ADA’s mission is to “make it possible for everyone with a disability to live a life of freedom and equality.” This video from the ADA National Network features Dr. Temple Grandin and others discussing the importance of this landmark legislation. 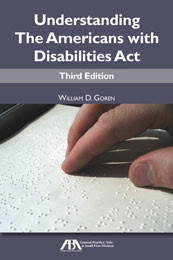 The Brooklyn Law School Library has in its collection several titles on the subject of the Americans with Disabilities Act of 1990 including Understanding the Americans with Disabilities Act by William D. Goren, 3d ed. (Call #KF480.G67 2010) with these chapters: Concepts underlying the ADA and key definitions — Essential functions of the job — Concept of undue hardship and reasonable accommodation in the employment context — Treatment of alcoholics and drug addicts — Pre-employment medical exams/disability-related inquiries — The ADA, health insurance, and the Genetic Nondiscrimination Act — ADA and the public sector (Title II of the ADA) — Places of public accommodations and commercial facilities — The ADA and the health care provider — The interrelationship between the ADA and other laws — Remedies and procedural issues — ADA and sports — Hot areas — Are you ready to rock and roll with your ADA case?