The Second Circuit Court of Appeals recently ruled that the federal securities laws preclude Sherman Act antitust claims. The decision, Electronic Trading Group v. Banc of America Securities, held that the plaintiff investors were precluded from asserting an antitrust claim against brokers accused of conspiring to charge excessive fees to short sellers where the federal securities regime provided for a remedy. The class-action alleged that the banks conspired to charge inflated borrowing fees through daily conversations, e-mails, and faxes, and jointly determined which securities they should classify as “hard-to-borrow.” The Second Circuit ruled that securities laws take priority over antitrust laws noting that “antitrust liability would inhibit conduct that the SEC permits and that assists the efficient function of the short-selling market.”

In his ruling affirming the dismissal of the antitrust allegations of the complaint by the New York Southern District Court, Judge Dennis Jacobs applied the preclusion analysis stated in Credit Suisse Securities (USA) LLC v. Billing, 551 U.S. 264 (2007). There, the US Supreme Court stated the four considerations of the preclusion analysis: (a) whether the “area of conduct [is] squarely within the heartland of securities regulations”; (b) whether the Securities and Exchange Commission (“SEC”) has “clear and adequate authority to regulate”; (c) whether there is “active and ongoing agency regulation”; and (d) whether “a serious conflict” arises between antitrust law and securities regulations.

The Billing case involved antitrust claims brought by investors in an initial public offering alleging that the underwriters engaged in questionable “tying” practices that required purchasing less desirable securities and “laddering” practices that required buyers to take additional shares at escalating prices, forcing them to pay high commissions on subsequent buys. In Billing, the District Court dismissed the complaint on the grounds that federal securities law impliedly precludes application of antitrust laws. The Second Circuit reversed and reinstated the complaints. The US Supreme Court, addressing the question whether there is a “‘plain repugnancy’” between antitrust claims and federal securities law, concluded that there is, interpreting the securities laws as implicitly precluding the application of the antitrust laws to the conduct alleged in that case. 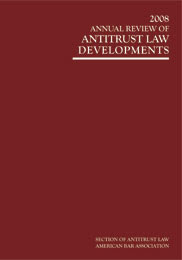 The BLS Library subscribes to the Annual Review of Antitrust Law Developments (Call #KF1649 .A763) published by the Section of Antitrust Law of the American Bar Association, which summarizes developments each year in the courts, at the agencies, and in Congress. The annual supplements are recognized as an authoritative and comprehensive set of research tools for antitrust research.