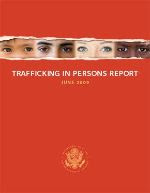 Last month, the US Department of State released the 2009 Trafficking in Persons Report (TIP). This is the ninth annual report that the State Department has issued. The report, mandated by Congress, gives a snapshot of human trafficking worldwide along with the efforts of individual nations to combat it. This year’s report says that the global financial crisis has increased the worldwide trade in trafficked persons, especially in Africa. The report cites the International Labor Organization, which estimates at least 12.3 million adults and children are victims of forced labor, bonded labor and sex slavery each year.

The report is controversial because while other nations are ranked in tiers according to their efforts to control and combat trafficking within their borders, the United States is not included, nor is it ranked. This year’s report lists 28 nations in Tier I — the highest ranking for minimum compliance with the United States’ anti-trafficking legislation, with 80 nations in Tier 2 and another 52 in the so-called Tier 2 Watch list. The latter designation, which includes China most prominently, is a somewhat murky category that praises a nation for attempting to make progress in combating human trafficking, but also is critical for an increase in reported trafficking incidents. In releasing the TIP Report, Secretary of State Hillary Clinton acknowledged that the U.S. is engaged in its own struggle with trafficking. Her statement said, in part:

“The ninth annual Trafficking in Persons Report sheds light on the faces of modern-day slavery and on new facets of this global problem. The human trafficking phenomenon affects virtually every country, including the United States. In acknowledging America’s own struggle with modern-day slavery and slavery-related practices, we offer partnership. We call on every government to join us in working to build consensus and leverage resources to eliminate all forms of human trafficking.”

Since its inception in 2000, the U.S. Department of State’s annual Trafficking in Persons report has passed judgment on foreign governments regarding their efforts to combat human trafficking. But next year for the first time, promises Secretary of State Hilary Clinton, the U.S. will grade itself using the same standards.