On the 206th anniversary of the landmark US Supreme Court case of Marbury v. Madison, 5 U.S. 137 (1803), a Newsweek article Why Marbury v. Madison Still Matters lists important lessons from the case. Among them is first, the genius of the American system with an independent judiciary having the last word on the law and the Constitution; second, the fact that the Court was able to rise above being a predictable political player in a highly partisan cause and lastly, that greatness may arise from the messiest of political circumstances. Further timely reading is the WSJ Law Blog interview with David McKean, co-author of a soon to be released book The Great Decision: Jefferson, Adams, Marshall and the Battle for the Supreme Court.

Recently, HeinOnline announced the results of its Hein ScholarCheck analysis on the U.S. Supreme Court Library with a list of the 50 Most-Cited Supreme Court Cases in HeinOnline. Marbury placed 13th on the list being cited 6,835 times.

The BLS Library has in its collection several items on the landmark case. They are:

The Activist: John Marshall, Marbury v. Madison, and the Myth of Judicial Review by Lawrence Goldstone (Call No. KF4575 .G65 2008) which traces the events surrounding the 1803 decision regarding judicial review that ultimately gave the Supreme Court the right to determine how the Constitution and its laws are interpreted. 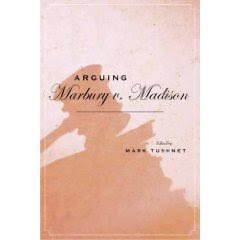 Arguing Marbury v. Madison edited by Mark Tushnet (Call No. KF4575 .A965 2005) which includes the transcript of the oral argument and the intellectual background of the case.

Marbury Versus Madison: Documents and Commentary by Mark A. Graber and Michael Perhac (Call No. KF4575 .M367 2002) with documents and essays timed for the bicentennial in 2003, this work explains: the constitutional, political and philosophical background to judicial review; the historical record leading to this landmark case; the impact of the decision since 1803; and its impact on the world stage.