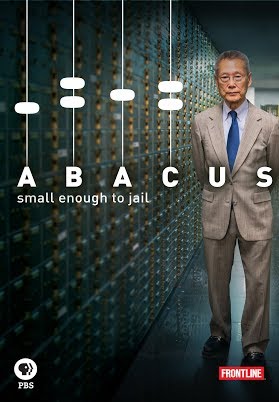 If you want a tale of a bank charged with falsifying loan-application documents by inflating borrower assets, incomes, and job titles, and “fraudulent mortgages” being sold to Fannie Mae, the federally backed mortgage company, see the documentary Abacus: Small Enough to Jail. It is a 2016 American documentary by Steve James that centers on Abacus Federal Savings Bank, a family-owned community bank situated in Manhattan’s Chinatown. It was deemed “small enough to jail” rather than “too big to fail” and became the only financial institution to face criminal charges following the subprime mortgage crisis when District Attorney Cyrus R. Vance Jr. announced a 184-count indictment against the bank and 19 of its current and former employees accusing them of conspiracy, grand larceny, falsifying business records, and residential mortgage fraud.  Ten Abacus employees accepted plea deals in exchange for testifying against the bank, and Ken Yu became the star witness. The film debuted at the 2016 Toronto International Film Festival winning first runner-up for the People’s Choice Award in the documentary category.

The principal behind Abacus is Thomas Sung (Brooklyn Law School, Class of 1964). Born in Shanghai, he emigrated at age 16 to New York in 1952. His family was processed through Ellis Island and detained for three months before they could settle in New York. That left Sung determined to learn the law and help other immigrants. After earning a bachelor’s and master’s degree from the University of Florida in agricultural economics, he worked as an analyst for several New York companies while attending Brooklyn Law School at night. He began practicing law in 1964 and worked pro bono for the Chinese community. Sung founded Abacus in 1984 to serve the immigrant population, which had grown in New York. “We take people from illegal immigrant status, to legal status, to prosperous business people and homeowners,” said Sung.

Whether the government was giving a pass to big banks and picking on a small one, perhaps with a tinge of racism in its motives, is a question. Vance called the accusations of cultural bias “entirely misplaced and entirely wrong” adding “I felt that our handling of the bank was consistent with how we would have handled the bank if we were investigating a bank that serviced a South American community or the Indian community.” The movie shows its affection for the Sung family, which was equipped professionally, if not financially, for an expensive legal battle. Three daughters were trained as lawyers, including Jill Sung, the bank’s chief executive, Vera Sung, a director of the bank, who worked for the Brooklyn DA’s office for two-and-a-half years, and Chantarelle Sung, who worked in the Manhattan DA’s office for seven years leaving when Vance took over and started prosecuting her family’s bank. The NY Times criticized the filing as a dubious mortgage fraud case against Abacus, which was tatally exonerated at trial. Local newspapers put the news of the bank’s acquittal on their front pages. There was criticism from Bennett L. Gershman, a former prosecutor at the Manhattan D.A.’s office now a professor at Pace Law School, who said “This case just involved a terrible example of poor judgment by the prosecutor.” He characterized it as a “David and Goliath situation,” echoing a widespread view that it was convenient to make an example of a small bank like Abacus.