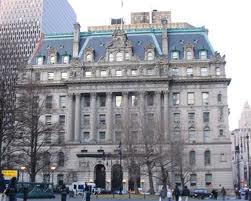 The Law Library Association of Greater New York, a chapter of the American Association of Law Libraries, is the local library association for legal information professionals.  Each year LLAGNY, as it is referred to, hosts a series of educational programs.  This year, as a member of LLAGNY’s education committee, I coordinated tours of the City Hall Library and the new Visitors’ Center.  The first tour was held on March 13, 2012 and the second tour, already fully booked, is slated for April 24, 2012.  Since the City Hall Library collection is little known in the New York City community, it’s the purpose of this post to inform the BLS community about this gem of a collection.

The City Hall Library is located in room 112 of the Surrogate’s Court building at 31 Chambers Street in Manhattan.  The architect of the building was John R. Thomas and it was constructed between 1899 and 1907.  The building was originally intended as a Hall of Records and was renamed the Surrogate Courthouse in 1962.  The first floor interior is frequently compared to the Paris Opera House.  The building was designated a New York City landmark in 1977.

Some of the highlights of the City Hall Library include:

The new Visitors’ Center, scheduled to open in April 2012, will have rotating displays of pictures, memorabilia and miscellaneous items of interest.  During the LLAGNY pre-opening tour in March, we saw several gifts presented to the mayors over the years from visiting heads of state, mug shots of various infamous New York City crime figures and most impressive to me, were the beautiful crystal ball and bat given to Mayor Rudolph Giuliani by the New York Yankees when they won the World Series in 2000.