Last month, the Second Circuit Court of Appeals in Capital Management Select Fund Ltd. v. Bennett ruled that plaintiff investors failed to allege deceptive conduct by the principals because the investors knew what they were getting into when they signed a standard agreement allowing Refco Capital Markets to “re-hypothecate” or otherwise use securities and other property held in customer brokerage accounts to secure margin trading. Re-hypothecation, which was at the heart of the MF Global collapse (see MF Global and the Great Wall St Re-Hypothecation Scandal), is the pledging to banks by securities brokers of the amount in customers’ margin account as collateral for broker loans, which are used to cover margin loans to customers for margin purchases and selling short. Re-hypothecation occurs when a broker, to whom his customers have hypothecated — or pledged — securities as collateral for a margin loan, pledges those same securities to a bank or other lender to secure a loan to cover the firm’s exposure to potential margin account losses. This video explains the process simply.

Judge Ralph Winter in the 2nd Circuit case decision upheld the dismissal of the consolidated lawsuits for lack of standing, as well as failure to show how Refco officers had deceived them, saying “We hold that appellants have no remedy under the securities laws because, even assuming they have standing, they fail to make sufficient allegations that their agreements with RCM misled them or that RCM did not intend to comply with those agreements at the time of contracting.” He went on to say “On review of the customer agreement, we conclude that it unambiguously warned the RCM Customers that RCM intended to exercise full rehypothecation rights as to the customers’ excess margin securities.” The judge also found that because Refco had stated that it was not a US regulated entity, rehypothecation rights in the agreement were not subject to either SEC rules or New York state law. “In short, RCM’s alleged violation of federal law does not in and of itself constitute deceptive conduct,” Judge Winter found, adding that the customers’ monthly account statements were not deceptive “about what securities may or may not be rehypothecated.” For more, see the article in the NY Law Journal.

A 2010 IMF working paper, The Sizable Role of Rehypothecation in the Shadow Banking System, provides estimates from the hedge fund industry for the “churning” factor or re-use of collateral and examines the policy implications of the practice. The paper states that “In the aftermath of Lehman, larger hedge funds are increasingly seeking to ensure that assets that have not been pledged as collateral are kept in segregated client accounts, so that prime brokers have absolutely no claim over those assets.” See chart below. 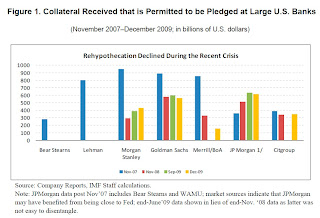 A Financial Times article, Lehman Collapse Puts Prime Broker Model In Question (available to member of Brooklyn Law School via the BLS Library ProQuest subscription) suggest blocking rehypothecation altogether. “Even if there is no dramatic change to the business model, prime brokers face a less profitable future and hedge funds will have to pay more for less generous leverage. If investors get their way, that cost will be even higher – but at least there will be less chance of funds being destroyed by a catastrophic bank collapse.”