The current edition of Barron’s, the Down Jones Business and Financial Weekly newspaper that covers US financial information, has an excellent interview with Brooklyn Law School Professor Roberta Karmel for anyone interested in understanding the 2008 financial meltdown and how to avoid a repeat of that near economic collapse. The interview, in How to Break Up the Banks, is available through the BLS Library print subscription to Barron’s and its online counterpart which members of the BLS community can access by speaking to a reference librarian. Prof. Karmel, a former Securities and Exchange Commissioner, sees the Dodd-Frank Wall Street Reform and Consumer Protection Act of 2010, designed to shore up the financial system against the next big financial shock wave, as window dressing that will not withstand another major credit bubble or financial collapse. Instead she suggests that a strong New Deal prescription be applied to take the banks apart by resurrecting the techniques used in the Public Utility Holding Company Act of 1935, what she calls “the most ambitious legislation of the Depression-inspired federal attack on concentrated economic power.”

Viewing Dodd-Frank as weak tea diluted by politicians who engaged in the deregulatory policies of the last three decades and lacking the political will to change, Prof. Karmel says that the legislation neither curtailed the leverage inherent in derivatives trading nor reduced the size or complexity of the existing mega-banks. Noting the historic American aversion to the concentration of banking power, she says that “we have to eliminate the problem that comes along with too-big-to-fail: that of socializing losses and privatizing profits. Such a system is antithetical to any notion of the capitalist ideal.” She notes that between 1980 and 1995, the number of banks dropped from 14,000 down to 10,000. This chart (click to enlarge) shows how 37 banks were consolidated into just four mega banks in the last two decades. 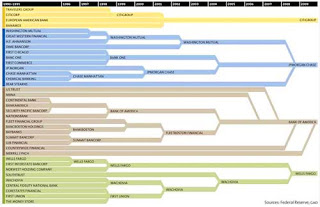 Prof. Karmel sees parallels in the current too-big-to-fail banking system and the 1930s where a specialized antitrust program was brought against the public-utility holding companies, seen as the culprits in the 1929 crash. PUHCA, passed in 1935, but not fully implemented until the 1950s due to intense industry opposition, was finally accepted by the judiciary and the industry so that the SEC succeeded in restructuring the public utilities. She imagines a statute analogous to PUHCA that could prove an effective antidote to the functional regulation that sowed the seeds for the financial crisis of 2008.

For more on this topic, see the BLS Library copy of Too Big to Fail: The Inside Story of How Wall Street and Washington Fought to Save the Financial System—and Themselves by Andrew Ross Sorkin (Call # HB3722 .S659 2009), a moment-by-moment account of the 2008 financial collapse that documents state efforts to prevent an economic disaster, offering insight into the pivotal consequences of decisions made throughout the past decade.