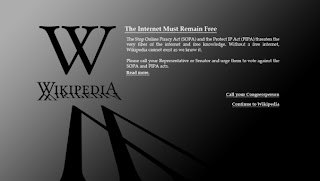 On Wednesday, January 18, 2012, the English language version of Wikipedia will go dark in protest of proposed US anti-piracy laws, the Stop Online Piracy Act (SOPA – H.R. 3261) and the Protect IP Act (PIPA – S.968), joining other sites, such as MoveOn, Reddit, BoingBoing, Mozilla, and WordPress. Other big name sites like Craigslist, Google, Facebook, Twitter and Tumblr all have expressed their stance against the bills but will not be joining the day of protest. Wikipedia explains the reasons for its blackout here:

My hope is that when Wikipedia shuts down on January 18, people will understand that we’re doing it for our readers. We support everyone’s right to freedom of thought and freedom of expression. We think everyone should have access to educational material on a wide range of subjects, even if they can’t pay for it. We believe in a free and open Internet where information can be shared without impediment. We believe that new proposed laws like SOPA and PIPA, and other similar laws under discussion inside and outside the United States don’t advance the interests of the general public.

A list of organizations and individuals opposing PIPA and SOPA is available at the Center for Democracy and Technology website along with a large number of professors including Brooklyn Law School Prof. Derek E. Bambauer, who signed a letter in opposition to the proposed bill materials. In a November 2011 blog post at Info/Law, Prof. Bambauer wrote that PIPA “relies on DNS blocking. The legislation says ISPs must take ‘technically feasible and reasonable measures designed to prevent access by its subscribers located within the United States’ to Web sites targeted under the bill, ‘including measures designed to prevent the domain name of the foreign infringing site (or portion thereof) from resolving to that domain name’s Internet protocol address.’ The definitional section of the bill says that ‘including’ does not mean limited to.’ In other words, if an ISP can engage in technically feasible, reasonable IP address blocking or URL blocking – which is increasingly possible with providers who employ deep packet inspection – it must do so. The bill, in other words, targets more than the DNS.” He concludes “I predict that a bill like PROTECT IP will become law. Then, we’ll fight out again what the First Amendment means on the Internet, and then the myth of America’s free speech exceptionalism on-line will likely be dead.”

This video from the Guardian puts the issue in easy to understand terms:

BLS Professor Jason Mazzone, author of the new book, Copyfraud and Other Abuses of Intellectual Property Law stated in The Privatization of Copyright Lawmaking: “Much of what will happen under SOPA will occur out of the public eye and without the possibility of holding anyone accountable. For when copyright law is made and enforced privately, it is hard for the public to know the shape that the law takes and harder still to complain about its operation.”