This week, the US Supreme Court heard oral arguments in Williams v. Illinois on whether a defendant’s rights were violated with the admission of expert testimony about the results of a DNA test where there was no opportunity to confront the actual analysts. Defendant’s attorney, in appealing a decision of the Illinois Supreme Court upholding the rape and kidnapping conviction, argued that without an analyst from the lab present to testify about the DNA results, the defendant’s rights were violated, especially since the lab tests themselves were not entered into evidence. The Illinois Supreme Court ruled that there was no violation of the defendant’s confrontation right because the findings of the lab report were being admitted only to explain the expert’s opinion about the results.

Since the Court’s decision in Crawford v. Washington, 541 U.S. 36 (2004), Confrontation Clause jurisprudence has been an active area of case law. Earlier this year, the Supreme addressed the Confrontation Clause and lab tests in two cases: Melendez-Diaz v. Massachusetts and Bullcoming v. New Mexico. The Court ruled that the Confrontation Clause barred the testimony of a surrogate analyst about testimonial statements of the certifying analyst in the forensic report. But the Williams case differs from those cases because instead of introducing the report of the analyst who performed the DNA test, the state of Illinois called another analyst to discuss it. Without cross examination of the person who conducted the test, there remains a question whether the test was performed according to proper procedures. Having an expert who did not actually perform the test discuss the report asks the jury to assume the tests were performed correctly.
The briefs related to the Williams case are available at SCOTUSblog including an amicus brief of the District Attorney of New York County arguing against an “all technicians must testify” rule for New York’s more than 100,000 criminal cases each year as the associated “costs and logistical hurdles would make it all but impossible to prosecute them successfully.” It is natural for prosecutors to ask the courts to make their jobs easier using arguments of scarce resources. The administration of justice is costly but failing to enforce basic procedural rights is costlier. For more on this topic, see the ABA Journal article The Latest Test on the Confrontation Clause by Erwin Chemerinsky. 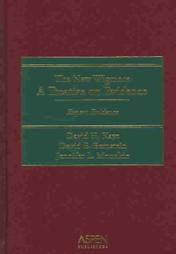 On the subject of expert evidence, the Brooklyn Law School Library has in its collection the second edition of The New Wigmore: A Treatise on Evidence: Expert Evidence by David H. Kaye, etc. (Call # KF8935 .W486 2011), one volume of a five volume authoritative series that presents the same quality of research, thought, and analysis as the original Wigmore and a present-day counterpart to the seminal evidence treatise.