The Transactional Records Access Clearinghouse (TRAC) from Syracuse University, a source for comprehensive, independent and nonpartisan information about federal enforcement, staffing and spending, recently issued a report that “Federal prosecutions for financial institution fraud have continued their downward slide despite the financial troubles reported in this sector. The latest available data from the Justice Department show that during the first eleven months of FY 2011 the government reported 1,251 new prosecutions were filed. If this activity continues at the same pace, the annual total of prosecutions will be 1,365 for this fiscal year, down 28.6 percent from their numbers of just five years ago and less than half the level prevalent a decade ago.” See chart below showing the long term trend in these prosecutions over the last two decades. 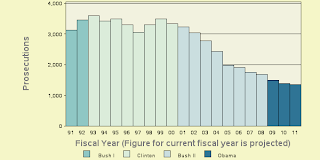 TRACfed is available electronically to Brooklyn Law School members through the BLS Library subscription which allows users to generate reports of specific data from a variety of statistics released by the federal government. Coverage includes all criminal matters recommended for prosecution in the federal courts and the civil income tax audits by the IRS. It also includes criminal, civil, and administrative law enforcement and sections on judges and prosecutors, federal funding for public services and national demographic and economic information by county, state or federal judicial district. TRAC maintains two Web sites – one is a free public site, the other is a data warehouse known as TRACFED. Both can be accessed from TRAC’s public site and home page.