The Securities and Exchange Commission announced that it filed a record 735 enforcement actions and collected some $2.8 billion in sanctions in the fiscal year that ended September 30 with 146 of these actions being taken against investment advisors, a 30% increase over 2010. The previous year, it brought 677 cases collecting slightly more in penalties — $2.85 billion. The record number of enforcement actions is a result of the enforcement division undergoing its most “significant” reorganization in 2009 and 2010 since being established in the early 1970s. The number of enforcement actions against advisors and broker-dealers also increased, going from 112 in 2010 to 146 at the end of September. The chart below from the SEC website shows Year-by-Year SEC Enforcement Actions 2002 to 2011. 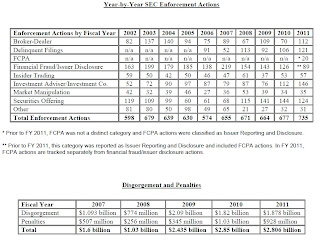 SEC Chairman Mary Schapiro boasts of increased enforcement in a statement announcing the enforcement results: “We continue to build an unmatched record of holding wrongdoers accountable and returning money to harmed investors. I am proud of our Enforcement Division’s many talented professionals and their efforts that resulted in a broad array of significant enforcement actions, including those related to the financial crisis and its aftermath.”

Increased fines are not the only measure of the effectiveness of an agency’s enforcement efforts. A recent article reports that in the case of U.S. Securities and Exchange Commission v. Citigroup Global Markets Inc. pending in the U.S. District Court for the Southern District of New York, US District Judge Jed S. Rakoff is considering whether to approve Citigroup’s proposed settlement of $285 million ($95 million plus $190 million in disgorgement and interest) with the SEC. Expressing doubts about whether the agreement is sufficient for alleged misdeeds over mortgage-related securities in a deal where Citibank made a $160 million profit and caused its customers to lose $700 million, Judge stopped short of saying he would reject the settlement withholding his approval of the settlement which allows Citibank to avoid prosecution without any admission of wrongdoing. He ridiculed the SEC’s decision to describe the crime as “negligence” instead of intentional fraud, questioning whether a bank making a profit of $160 million by causing losses of $700 million to its customers can conceivably be described as an accident. See Judge Rakoff’s his questions about the proposed settlement in his Order dated October 27 and Citbank’s memorandum in response.

For in depth research on this topic, see the Brooklyn Law School Library resource from its subscription to BNA, the Corporate Practice Series Portfolio No. 77-4th, The SEC Enforcement Process: Practice and Procedure in Handling an SEC Investigation which discusses practice and procedure in handling both informal and formal investigations by the SEC’s Division of Enforcement, including responding to subpoenas, producing documents, and testimony; when and whether companies should conduct internal investigations; the Wells process and settlement discussions; remedies; and consent decrees. The portfolio also examines related issues, including disclosure of an SEC investigation and issues arising out of parallel civil and criminal inquiries.