The one-month old Occupy Wall Street protest has been getting some attention from law schools in general and Brooklyn Law School in particular. A blog post at Out of the Jungle traces the spread of the protests from lower Manhattan. BLS Professor Jonathan Askin has written an article addressing the nature of the protests. He sees a difference between protesters of the past with specific objectives like ending the war or achieving racial and gender equality and today’s protesters whose objectives are less defined. He calls them “digital natives” who imagine alternative “What If” worlds and says they “have come to Wall Street with frustrations over the existing political/corporate structures and processes, and are trying to re-imagine a better world. They might not have all the answers, but they are willing to try many of the possibilities.” Prof. Askin concludes his article saying “we certainly should be listening . . . to see what ideas might get us out of the intractable economic, social and political quagmire into which our opaque, hierarchical system has brought us and lead us to a better world.”

One of those digital natives is Nathaniel Costa, BLS Class of 2014, who has been at Occupy Wall Street and imagined one of those “What If “worlds saying “I’m here because I see an injustice in this country; the middle class has been dying for 30 years. And now I hear from the Republicans we have to protect the ‘job creators’. Well I feel no pity for the top 1 percent. I see the top 1 percent making a fortune in the last several decades and people are suffering more than ever. This is democracy in action. If the majority of people voted in this country a Republican would never be elected again.”

Comments from other law schools on Occupy Wall Street include one from Professor Paul Campos of the University of Colorado at Boulder who also notes the generational divide in his article Occupy Wall Street’s Age Divide. He argues that baby boomers do not understand that today’s protesters do not have all the advantages now being denied the younger generation. He cites his own encounters with recent law school graduates trying to get jobs as lawyers to discover that more than half were unsuccessful. Another post at Balkanization by Seton Hall Professor Frank Pasquale has comprehensive links about the growing protests against the rule by America’s wealthy corporate and financial elite. Protests of income and wealth inequality may not resonate with all but this image on the system of justice presents a stark contrast. 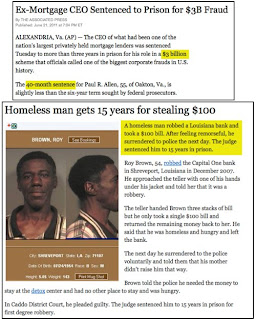