If you wonder why you get no response to your emails, it may be that fewer people are reading them. Measuring the U.S. digital media, a recent study, the 2010 U.S. Digital Year in Review, recaps key trends in e-commerce, social networking, online video, search, online advertising and mobile. (Download a free copy at this link.) This chart shows the trend that teenagers are using email less and relying more on social networks and text messaging: 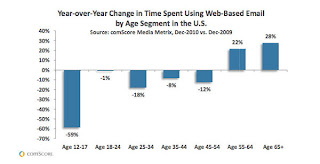 But even older users are using social media more. Last year’s Pew Research Center’s Internet & American Life Project report (at this link) shows that use of social platforms has grown among those aged 50-64. Mary Madden author of the report explains “Young adults continue to be the heaviest users of social media, but their growth pales in comparison with recent gains made by older users. Email is still the primary way that older users maintain contact with friends, families and colleagues, but many older users now rely on social network platforms to help manage their daily communications.” 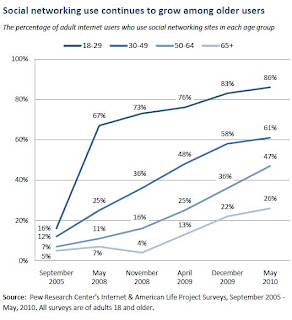 The 2010 U.S. Digital Year in Review study shows that the decline in email use carries all the way from ages 12-54 largely as a result of the fact that in 2010, Facebook surpassed each of the top three largest web platforms for share of time spent, capturing the #1 ranking in August as shown in this chart. 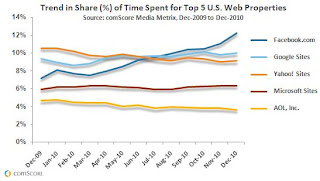 Law students in the future are less likely to check their email and more likely to user text messages or tweets. Social media is increasingly a vital part of our futures. Texting and social media are much faster than traditional email which is quickly becoming outdated.

The Brooklyn Law School Library’s collection includes Social Media for Lawyers: The Next Frontier by Carolyn Elefant and Nicole Black (Call #KF320.A9 E44 2010) which says that lawyers who dismiss social media do so at their peril and shows lawyers how to use a practical approach to social media. Written by two lawyers, this book is designed for novice and advanced users.