The Brooklyn Law School Library will be closed from Friday, December 24 and reopens Monday, January 3, 2011. The BLS Library Blog wishes you a Merry Christmas, a Happy Holiday, and a Happy New Year. 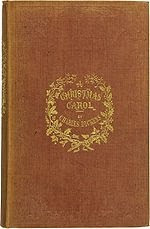 A keyword search of SARA, the BLS Library Catalog, for Christmas yields only a few hits, one of which is notable. Charles Dickens in Chancery: Being an Account of his Proceedings in Respect of the “Christmas Carol” with Some Gossip in Relation to the Old Law Courts at Westminster is available through the library’s Making of Modern Law subscription. It tells the story about Charles Dickens holiday classic, A Christmas Carol published a few days before Christmas of 1843 and the legal affair that unfolded in its aftermath. The book’s successful publication is a story all of its own. Its success led to a number of unauthorized variations in the month following publication. One of these appeared in book shops on January 6, 1844 with the title “A Christmas Ghost Story. Re-Originated from the Original by Charles Dickens, Esq., and Analytically Condensed Expressly for This Work”. Two days later Dickens’s solicitor filed for an injunction against its publisher, Peter Parley’s Illuminated Library to stop publication of this obviously plagiarized edition. The defendants argued that Dickens’s works had been “re-originated” before and Dickens had not filed suit to stop the practice. However, Vice-Chancellor Bruce found that this piracy had gone “beyond all previous instances” and ruled in Dickens’s favor.

Dickens initiated five more suits against plagiarists of his popular “little Carol” in the next four months. Because the defendants all declared bankruptcy, there were no assets to pay even the court costs Dickens incurred while trying to protect his intellectual property. While his own publisher sold thousands of copies of his classic tale, his profit was greatly reduced by his encounter with Chancery Court. For more on the Carol lawsuit, see Grafting A Christmas Carol by Michael Hancher, SEL Studies in English Literature 1500-1900, Volume 48, Number 4, Autumn 2008, pp. 813-827, available through the BLS Library subscription to Project Muse.

Dickens’ Pyrrhic victory in the Christmas Carol suit arguably led to his protest against the arrogance of law and judges in his novel Bleak House published a decade later. Consider this quote from from the opening pages of Bleak House:

This is the Court of Chancery; which has its decaying houses and its blighted lands in every shire; which has its worn-out lunatic in every churchyard; which has its ruined suitor, with his slipshod heels and threadbare dress, borrowing and begging through the rounds of every man’s acquaintance; which gives to monied might; the means abundantly of wearying out the right; which so exhausts finances, patience, courage, hope; so overthrows the brain and breaks the heart; that there is not an honorable man among its practitioners who does not give—who does not often give—the warning, “Suffer any wrong that can be done you, rather than come here!”