The US Supreme Court is reviewing two cases that could have a profound effect on class action practice. The cases are AT&T Mobility v. Concepcion and Wal-Mart v. Dukes. The AT&T case, which concerns arbitration agreements, may have an impact on class action lawsuits. The dispute deals with contracts between AT&T and its customers containing class action waivers that could create more difficulty for class action proceedings, a potential “class action ban case in arbitration clothing.” The plaintiffs, Vincent and Liza Concepcion, are challenging a mobile phone contract clause that includes a waiver of class action rights. AT&T Mobility is arguing that California’s law banning waiver of class actions in contracts, including arbitration clauses, is preempted by the Federal Arbitration Act. For more on the case, see Adam Liptak’s NY Times article Supreme Court Weighs Class-Action Suits. If the Court rules that the Federal Arbitration Act preempts California’s law a “presumption against class actions could be created.”
The second case, Wal-Mart Stores v. Dukes, is a direct challenge to the practice of class-action lawsuits. Earlier this month the Court granted certiorari to determine whether the largest class action suit in history can proceed. The nine-year-old case asserts that despite lower turnover rates and better performance evaluations, Wal-Mart for decades has passed over women within the company for promotion and paid them less than men for the same jobs. An article in the National Law Journal Big Term for Class Actions addresses the perception of a pro-corporate bias in the Supreme Court. If the court sides against customers in the AT&T case and against the plaintiffs claiming gender discrimination in the Wal-Mart case, there will be greater restrictions of class-action lawsuits, one of the most powerful tools to challenge corporate misconduct. 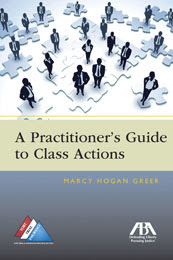 The Brooklyn Law School Library has recently added to its collection A Practitioner’s Guide to Class Actions by Marcy Hogan Greer (Call #KF8896 .P735 2010) a comprehensive guide that provides practitioners with an understanding of the intricacies of the class action lawsuit. The 1300 page guide has a state-by-state analysis of the ways in which the class action rules differ from the Federal Rule of Civil Procedure 23.