If the New York City Landmarks Preservation Commission is successful with one of its latest proposals, there will be a new Borough Hall Skyscraper Historic District in Downtown Brooklyn adjacent to Brooklyn Law School. This map of the proposed district shows that the law school directly borders the area. 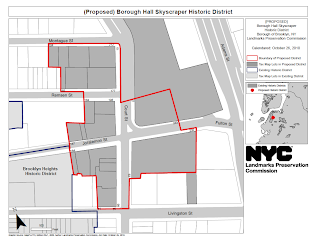 Unlike other recently landmarked brownstone Brooklyn areas, this new district will have buildings within its boundaries that are multi-story office buildings, if not skyscrapers. The Landmarks Preservation Commission says the proposed Borough Hall Skyscraper Historic District, with approximately 20 properties, “is characterized primarily by tall commercial buildings erected in the late nineteenth and early twentieth centuries. Designed in a range of styles from the Romanesque-Revival to the Beaux-Arts to the Modern, the structures in the study area represent the work of an impressive group of architects including Helmle, Huberty & Hudswell; McKenzie, Voorhees & Gmelin; George L. Morse; the Parfitt Brothers; Schwartz & Gross; H. Craig Severence; and Starrett & Van Vleck. It contains many of the borough’s most architecturally distinguished business buildings, as well as its two most significant civic structures—the Brooklyn Municipal Building and the individually-designated Brooklyn Borough Hall.” The district, not yet formally designated, was an item proposed for the Commission‘s calendar at Public Meeting Item No. 2 on October 26, 2010.

The Brooklyn Law School Library has in its Reference collection Guide to New York City Landmarks by Andrew Dolkart (Call #F128.18 .D65). The publisher is the New York City Landmarks Preservation Commission, the New York City agency responsible for protecting and preserving New York City’s architecturally, historically, and culturally significant buildings. The Commision, established in 1965 after the destruction of the original Penn Station, has 11 commissioners, including at least three architects, a historian, a realtor, a planner or landscape architect, as well as a representative of each borough. Litigation regarding the actions in the Penn Central case reached the US Supreme Court in Penn Central Transportation Co. v. New York City, 438 U.S. 104 (1978), a landmark decision on compensation for regulatory takings.