Congress has not enacted the Military Readiness Enhancement Act in the House and Senate version of bills (H.R. 1283 and S. 3065) to repeal Don’t Ask, Don’t Tell and replace it with a policy of nondiscrimination on the basis of sexual orientation. Instead, it will address the issue as part of the larger National Defense Authorization Act for Fiscal Year 2011 in H.R. 5136 and S.3454. The issue of gays in the military is very much in the news as today marks the 17th anniversary of the passage of the National Defense Authorization Act for Fiscal Year 1994 (P.L. 103-160). Subtitle G (Policy concerning homosexuality in the armed forces) of that law is codified at 10 U.S.C. § 654. The history of the passage of the current law is more fully described in an item in SARA, Brooklyn Law School Library’s catalog, a recent Congressional Research Service report called “Don’t Ask, Don’t Tell”: The Law and Military Policy on Same-Sex Behavior by David F. Burrelli. Today the Pentagon released its Report of the Comprehensive Review of the Issues Associated with a Repeal of “Don’t Ask, Don’t Tell”.

“Don’t Ask, Don’t Tell“, which is not the name of the law, is the policy proposed by Bill Clinton during the 1992 presidential campaign to lift the ban on gays in the military. Opponents of gays in the military including senior military officials were successful in defeating President Clinton’s proposal by including Section 654 which bipartisan majorities in Congress passed in 1993 and President Clinton signed into law on November 30, 1993. Opponents prefer to call the law “The Military Personnel Eligibility Act of 1993.” See Statement of Elaine Donnelly, President of the Center for Military Readiness (CMR), an anti-gay group opposing changes to Section 654. Among the board members of CMR is noted American conservative activist Phyllis Schaffley.

The “Don’t Ask, Don’t Tell” policy is not contained in any Presidential Executive Order but is implemented by two Department of Defense Directives: DoD Instruction 1332.14 (“Enlisted Administrative Separations”) and 1332.30 (“Separation of Regular and Reserve Commissioned Officers”). These directives stopped the military from asking about sexuality in recruitment forms and interviews but did not stop investigations into whether those serving in the military were gay. According to the Servicemember’s Legal Defense Network, an advocacy organization for LGBT military personnel, the Pentagon has dismissed more than 12,500 service members because of their sexual orientation since 1994. 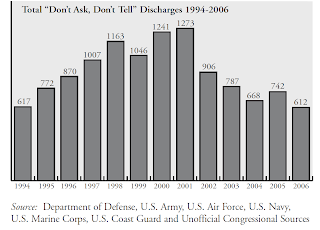