A recently revised Congressional Research Service report dated October 27, The Bush Tax Cuts and the Economy by Thomas L. Hungerford, states a higher total cost of permanently extending all of the Bush tax cuts to $5.048 trillion over the next ten years. The revised amount is significantly higher than the $2.8 trillion figure CRS reported in September as the new report takes into account the cost of servicing the debt due to lost revenue and indexing the alternative minimum tax (AMT) to inflation. See chart below for details: 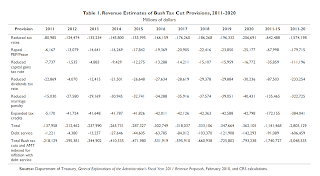 The September CRS report explained the details of the Bush tax cuts enacted in 2001 and 2003 and the effects of their expiration on the economic recovery in a summary which reads in part:

A series of tax cuts were enacted early in the George W. Bush Administration by the Economic Growth and Tax Relief Reconciliation Act of 2001 (EGTRRA; P.L. 107-16) and the Jobs and Growth Tax Relief Reconciliation Act of 2003 (JGTRRA; P.L. 108-27). These tax cuts, which are collectively known as the Bush tax cuts, are scheduled to expire at the end of 2010. Beginning in 2011, many of the individual income tax parameters (such as tax rates) will revert back to 2000 levels. The major tax provisions in EGTRRA and JGTRRA that are part of the current debate over the Bush tax cuts are the reduced tax rates, the reduction of the marriage penalty (and increase in the marriage bonus), the repeal of the personal exemption phaseout and the limitation on itemized deductions, the reduced tax rates on long-term capital gains and qualified dividends, and expanded tax credits. This report examines the Bush tax cuts within the context of the current and long-term economic environment. . . . . The Obama Administration has proposed allowing the Bush tax cuts to expire for high income taxpayers and permanently extending the tax cuts for middle class taxpayers. Compared to permanently extending all of the Bush tax cuts, this proposal is projected to increase tax revenues by $252 billion over five years and by $678 billion over 10 years, but still leaves federal debt on an unsustainable path. A temporary extension of the Bush tax cuts could provide time for Congress to consider tax reform and also provide a deadline to complete deliberations. Furthermore, allowing the tax cuts targeted to high income taxpayers to expire as scheduled could help reduce budget deficits in the short-term without stifling the economic recovery.