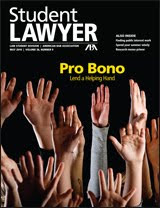 The latest edition of Student Lawyer (Volume 38, Number 9) contains an article by Bryan A. Garner in the Legal Writing Department entitled Sense and Sensibility: a Primer on Preparing Research Memos. The article helps writers to remember and identify the top 10 writing faults to become a more effective writer and self-editor. The primer on writing research memos advises writers to:

This article can improve the research and analytical skills of memos that young lawyers write whether they are junior attorneys in a law office, interns with a court or research assistans to a law professor. The current issue of the print version of Student Lawyer is at the Brooklyn Law School Library circulation desk. An online version of the article is available through the library’s ProQuest suscription.

Another item in the library’s collection to help write better memos is Garner on Language and Writing: Selected Essays and Speeches of Bryan A. Garner with a foreward by Ruth Bader Ginsburg. One quote from this item is worth repeating: “Lega­lese is jar­gon. All pro­fes­sions have it. All pro­fes­sions use it as a subs­ti­tute for thin­king, and they all use it in a way that makes them appear to be supe­rior. Actually, they appear to be buf­foons for using it. The legal pro­fes­sion may be the worst of all pro­fes­sions in using jar­gon.”