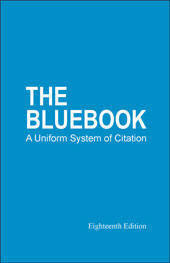 The preface to the 19th edition states that the “current edition of The Bluebook retains the same basic approach to legal citation established by its predecessors . . . Some citation forms have been expanded, elaborated upon, or modified from prevision editions to reflect the ever-expanding range of authorities used in legal writing and to respond to suggestions from the legal community.”

The 19th edition of The Bluebook changes Rule 18 dealing with the Internet, Electronic Media, and Other Nonprint Resources primarily to allow increased citation to Internet sources. For example, Rules 18.6 and 18.7 now allow for the use of timestamps in citations to audio and video recordings. Before, The Bluebook had no rule for citing podcasts. Rule 18.7.3 now provides citation guidance for podcasts and online recordings. Citation to a podcast is found in Rule 18.7.3. with this example: Splitting Verbs, Grammar Girl’s Quick and Dirty Tips for Better Writing (Feb. 26, 2009) (downloaded using iTunes).

Pace Law Library has compiled a list of the changes to the 19th edition and the associated rule numbers that are in this chart. Click on the image for the full-size PDF. 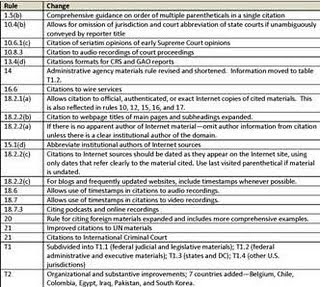