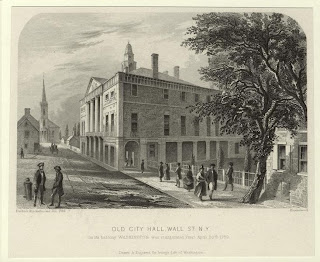 A NY Daily News article reports that in the first year of his presidency, George Washington borrowed two books from the New York Society Library, the oldest in the city and failed to return them. The titles of the two volumes were “Law of Nations,” a treatise on international relations, and Vol. 12 of the “Commons Debates,” which contained transcripts of debates from Britain’s House of Commons. When Washington borrowed the items, the New York Society Library had reopened in its old quarters pictured here which was in the old City Hall on Wall Street. At the time, New York was the nation’s capital and Congress occupied the building — then renamed Federal Hall – and it served as the first Library of Congress. Now the NY Society Library is located on East 79th Street.

A New York Law Journal article, Book Selections of Founding Fathers (Westlaw access) by NY Law Society Trustee William J. Dean from February 8, 2007 states that “The library’s charging ledger for 1789-92, bound in leather and weighing 18 pounds, was misplaced for years and then found in 1934 in a trash pile in the basement of its fourth home at 109 University Place.” In the ledger, an enry for October 5, 1789 reads “Law of Nations [&] Commons Debates – volume 12 – President.” Here the ledger records that President Washington took out “The Law of Nations” by Emmerich de Vattel. Also, volume 12 of the House of Commons Debates. The ledger does not record whether the president came in person or sent a messenger, nor is there any record of either volume being returned, or the president or vice-president being fined. The books were due by Nov. 2, 1789, and have been accruing a fine of a few pennies per day ever since. Head Librarian Mark Bartlett is quoted as saying “We’re not actively pursuing the overdue fines. But we would be very happy if we were able to get the books back.”

One of the two books Washington borrowed, Law of Nations, is available to the BLS community through the Law Library’s online Making of Modern Law subscription. A reminder for those students graduating Brooklyn Law School with unpaid fines and overdue or lost books: notices will be placed on their records at the Registrar’s Office that will prevent these students from graduating and taking the bar exam unless their library fines are cleared.