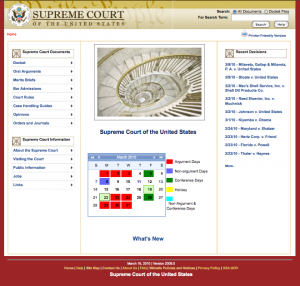 Yesterday, the US Supreme Court began hosting its own website http://www.supremecourt.gov. The Court assumes responsibilities for site management from the Government Printing Office (GPO) which provided hosting services for the past ten years. The new site has a new clean look. 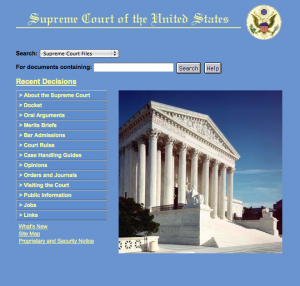 The former, much maligned GPO URL, http://www.supremecourtus.gov, will redirect users to the new site through July 1, 2010. The Office of Public Information of the US Supreme Court issued a press release saying :

Visitors will find that the Supreme Court Web site has an updated and more user-friendly design. The site continues to provide online access to the Court’s slip opinions, orders, oral argument transcripts, schedules, Court rules, bar admission forms, and other familiar information. But it also has several new features, including enhanced search capabilities, an interactive argument calendar, improved graphics, and additional historic information. The Court plans to continue to update and expand the site’s features over time.

The appearance of the new site is a vast improvment over the old one but the White House, Senate and House of Representaive websites appear more user-friendly. While the front page has links to recent opinions and the argument calendar and rotating pictures of the Supreme Court building, users may encounter some difficulties when they link to Supreme Court material from other sites. Many links simply default to the home page rather than linking directly to the desired material. For example, readers who link to the recent case of “Citizens United vs. Federal Election Commission” from the New York Times story on it will come to a default link to the SupremeCourt.gov home page and not the actual opinion. It seems that the webmasters have not yet forwarded many old URLs to new ones. Another item is that the Sliplists opinions go back only to the 2006 term. Before that, the website has bound volumes 502 to 548 and users need to know the citation in order to access material in the bound volumes. The Supreme Court’s improved Web site, as visually appealing as it is, continues to remain incomplete as an exhaustive historical record.
On the bright side, SupremeCourt.gov does provide access to orders, dockets, Court calendars, Argument Transcripts, Argument Calendars, Rules, case-handling guides, and press releases. As for Merit Briefs, the content of the new website is the same as that of the old website and researchers are left to use subscription databases or other internet sources.