The Government Accountability Office recently issued its October 2009 report Higher Education: Issues Related to Law School Cost and Access which addresses the cost of getting a law degree. The report says that law school costs have increased at a faster rate than the costs of comparable professional programs. Averaging $14,461 in the 2007-8 academic year, in-state tuition at public law schools have risen 7.2 percent higher than the cost 12 years earlier. In comparison, the cost of a medical degree from a public institution increased 5.3 percent over the same period, to $22,048 annually. Costs for nonresidents and at private institutions also increased at a slower rate over that period to an average of $33,042 about twice as much or more compared with residents’ costs at public institutions. Click on the chart below from the GAO report for a larger image. It was posted along with others on the TaxProf Blog entry GAO: U.S. News Rankings, Not Accreditation, Key Driver of Law School Tuition. 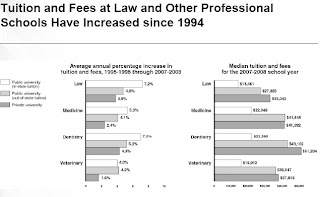 The report attributes the rise in law school tuition costs to competition for better rankings and a more hands-on approach to educating students for the increased price of a law degree rather than to accreditation standards of the American Bar Association. The report states that law schools are providing courses and student-support programs that require more staff and faculty. At the same time, the report noted decreases in state appropriations as a reason for rising tuition.

The report also addresses access to law schools and concludes that minorities are making up a larger share of law-school enrollments than in the past, despite a drop in the percentage of African-American students. In the academic years from 1994 to 2007, black students went from 7.5 percent of law school students to 6.5 percent, while the number of blacks earning bachelor’s degrees grew two percent. Law school rankings may account for lower or static enrollment rates of minorities as “Schools are reluctant to admit applicants with lower LSAT scores because the median LSAT score is a key factor in the U.S. News & World Report rankings.” Another posting on TaxProf Blog, U.S. News: GAO Wrong to Blame Us For Rising Law School Tuition, links to a contrary view in a U.S. News & World Report article, Who’s at Fault for the High Cost of Law School?