On November 9, the US Supreme Court will hear oral argument in two juvenile sentencing cases that question whether it is unconstitutional, under the Eighth Amendment’s ban on “cruel and unusual punishment,” to impose a life sentence without parole on a minor. The two cases, Graham v. Florida (08-7412) and Sullivan v. Florida (08-7621), will give the Court an opportunity to review an earlier decision in Roper v. Simmons, 543 U.S. 551 (2005), which ruled the death penalty for minors unconstitutional under the Eight Amendment partly on the theory that juveniles are not as responsible for their actions as adults. Advocates for juveniles argue that sentences of life without parole are the equivalent of death-in-prison sentences and should be judged by the same constitutional standard as a sentence directly imposing death. Advocates for tougher sentences for violent crime argue that life without parole is an effective and lawful sentence for the worst juvenile offenders with a place in our laws where 43 states, the District of Columbia, and the federal government have set the
maximum punishment for juvenile offenders at life without the possibility of parole. See Adult Time for Adult Crime: Life Without Parole for Juvenile Killers and Violent Teens by the Heritage Foundation.

The facts of the both cases are worth reviewing. A NY Times article from early this year stated that the then 13 year old Joe Harris Sullivan admitted that he and two older friends had burglarized the home of a 72 year old Florida woman. But he denied rape charges. The victim testified that her assailant was “a colored boy” who “had kinky hair and he was quite black and he was small.” She said she “did not see him full in the face” and so would not recognize him by sight. She recalled her attacker saying something like, “If you can’t identify me, I may not have to kill you.” At trial, Sullivan had to repeat this phrase several times. Although the victim did not clearly identify Sullivan, he was convicted after a one day trial where he was represented by a lawyer who made no opening statement and whose closing argument occupies about three double-spaced pages of the trial transcript. The lawyer was later suspended, and the Florida Bar’s Web site says he is “not eligible to practice in Florida.”

A recent Newsweek article states the then 17 year old Terrance Jamar Graham tried to rob a restaurant with two accomplices. Charged as an adult, he pled guilty to armed burglary charges, and received one year behind bars and three years probation. When he violated probation, he was sentenced, without trial, to life without parole.

Among the amicus briefs that the Supreme Court will consider is the Brief for Former Juvenile Offenders Charles S. Dutton, Former Sen. Alan K. Simpson and others in Support of Petitioner which argues for giving juveniles a second chance. Charles S. Dutton attended Yale University’s School of Drama and made his Broadway debut in1984 and received two Tony nominations. Alan K. Simpson served in the US Senate from 1979 to 1997, serving, among other positions, as Republican Whip and Chairman of the Veterans Affairs Committee. He has also served several terms in the Wyoming legislature.

The Brooklyn Law School Library has in its collection material related to the topic of sentencing juveniles to life without parole. See, for example, Symposium on Youth and the Law (Call # P N84 v. 22 no. 1) in 22 Notre Dame Journal of Law, Ethics, & Public Policy (2008) with its lead article at page 9 by Barry C. Feld entitled, “A Slower Form of Death: Implications of Roper v. Simmons for Juveniles Sentenced to Life Without Parole”. 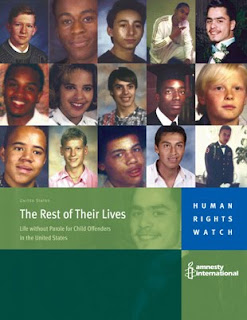