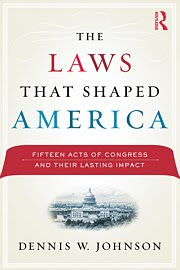 From the BLS Library’s recent New Book List is an item worth reading: The Laws that Shaped America: Fifteen Acts of Congress and Their Lasting Impact by Dennis W. Johnson (Call #KF352 .J64 2009). It tells the story of historical and landmark acts of Congress, and will appeal to those interested in history and politics. Highly readable, it is exhaustive in its research. The list of landmark legislation is set out in the chapter titles:

The usual problem that arises with the making of any short list is the certainty of omitting important items. For example, the author might well have included the National Prohibition Act (1919), the Securities Act of 1933, the Family and Medical Leave Act of 1993, the Americans with Disabilities Act of 1990, the Freedom of Information Act (1966), the Age Discrimination in Employment Act (1967) and many more. For those interested in a more complete listing of major acts of Congress, see the web site http://lawsandacts.com/ which has an alphabetical listing of United States Congress Major Acts with links to text explaining each act, bibliographies as well as the relationship of each act with other laws.