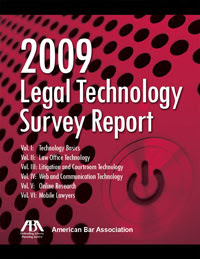 The ABA’s newly released 2009 Legal Technology Survey Report is in the BLS Library collection. The findings of the survey are presented in six volumes: Technology Basics, Law Office Technology, Litigation & Courtroom Technology, Web & Communication Technology, Online Research, and Mobile Lawyers. The BLS Library has the single volume combined set. The section on Online Research reveals that the percentage of respondents using free online research services continues to grow each year. However, the Online Research volume of the 2009 survey also reveals satisfaction (or lack thereof) with the features and functionality of the free online resources versus fee based online research service.

There are features of the Online Research section of the Survey Report that are available online: for example, the Online Research Index and an excerpt with the Table of Contents from the 2009 ABA Legal Technology Survey Report: Online Research. Readers interested in more particularized survey results, such as the percentage of U.S lawyers who use a Smartphone or a BlackBerry for doing legal research, will have to use the print version available at the Reference Desk in the library. However, see this observation in a post titled Google Mobile App: What Might It Mean for Legal Research? in today’s Law Librarian Blog:

Smartphone use by U.S. lawyers is widespread. In the latest ABA Survey, 64% of responding lawyers reported using a smartphone or BlackBerry for legal work. Of these lawyers, almost two thirds reported using a BlackBerry, and 14% an iPhone. These lawyers seem likely to use GMA. Further, in the ABA Survey almost one fifth of lawyers reported regularly using smartphones to conduct legal research outside the office. (However, in another portion of the ABA Survey, only 2% of lawyers reported using PDAs, smartphones, or BlackBerrys for legal research outside of the office; the reason for this discrepancy, which ABA Legal Technology Resource Center is reviewing, is unclear.) Although I haven’t found current data on law professors’ or law students’ use of smartphones, recent statistics on mobile device use on U.S. university networks indicate very high rates of iPhone use, which may suggest similarly high rates of use among U.S. law students and faculty. Though the ABA Survey did not appear to measure smartphone use by paralegals or law librarians, anecdotal evidence suggests that such use is common.