On June 9, 2008, the US Supreme Court issued a unanimous decision in Allison Engine Co., Inc. v. United States, ex rel. Sanders, strictly construing the language of the False Claims Act (“FCA”). The case involved two FCA suits alleging fraud in the negotiation and execution of subcontracts relating to the construction of Navy destroyers for components for the ships costing nearly $1 billion. The issue before the Court was whether the FCA covered false claims presented not to the Government, but to a contractor or other recipient of federal funds. The Court held that mere proof that a false or fraudulent claim was paid using government funds is not sufficient to establish liability under the law. Instead, the Court held that the FCA imposed a presentment requirement on plaintiffs to show that a defendant intended for the government to pay the claim, or that the government actually paid the specific claim.

The FCA, originally called the “Lincoln Law,” was first enacted in 1863 to combat fraud by companies that sold supplies to the Union Army. The law contains “qui tam” provisions that allow private citizens (whistleblowers suing on behalf of the government or “relators”) to sue companies or individuals defrauding the government. Qui tam is short for the Latin phrase qui tam pro domino rege quam pro se ipso in hac parte sequitur, which means “who pursues this action on our Lord the King’s behalf as well as his own.”
Traditionally, FCA claimants sued under 31 U.S.C. § 3729(a)(1), which imposes liability on any person who knowingly “presents, or causes to be presented” a false or fraudulent claim to the US. More recently, suits sought to broaden the reach of the FCA by bringing claims under 31 U.S.C. § 3729(a)(2), which imposes liability on any person who knowingly uses a “false record or statement to get a false or fraudulent claim paid or approved by the Government.” FCA suits have also used 31 U.S.C. § 3729(a)(3), which imposes liability on any person who “conspires to defraud the Government by getting a false or fraudulent claim allowed or paid.” The argument under these provisions is that a defendant is liable for false claims made to a private entity, as long as the entity used government funds to pay the claim. Under this view, companies who have never done business with the government could be liable. Lower courts have disagreed over the correct interpretation of subsections (2) and (3). In the Allison Engine litigation, the 6th Circuit ruled that the FCA applies to any defendant whose invoice was paid using federal funds. The DC Circuit rejected this interpretation concluding that it “would make the potential reach of the Act almost boundless.”
The Supreme Court’s decision subjects whistleblowers’ allegations to closer scrutiny by imposing liability under the FCA for false or fraudulent claims where government money is paid “by the government”. The Sixth Circuit held that proof of intent to cause a false claim to be paid by a private entity “using” government funds was sufficient to establish a violation of the FCA. The Supreme Court flatly rejected this view saying that the Federal government “must literally pay the bill”. There must be a direct link between the false statement and the federal government’s decision to pay or approve the false claim.
The 110th Congress is debating the False Claims Act Correction Act of 2008, which could significantly amend the FCA. The legislation would extend the reach of the FCA to any claim in which federal funds were involved in an actual or potential payment, irrespective of whether whether the federal government actually pays such claims directly or whether the defendant intended specifically to defraud the federal government (as opposed to intending to submit a false claim). A version of the bill was reported on September 25 by the Senate Judiciary Committee when it issued Senate Report 110-507. 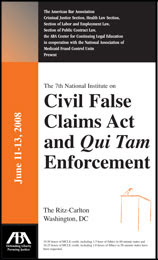 See the library’s recent acquisition The 7th Annual National Institute on Civil False Claims Act and Qui Tam Enforcement (Call # KF849 .C58 2008) for additional reading on the topic. This item has a CD component for study of the civil False Claims Act, one of the fastest growing areas of federal litigation, because of its unique qui tam enforcement mechanism. It brings together experts from all areas – healthcare, defense, pharmaceutical, oil and gas, accounting and consulting, construction, higher education and grant recipients – in which qui tam lawsuits under the FCA have been filed.