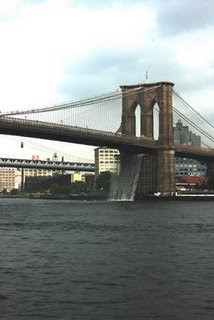 The New York City Waterfalls may not be as beautiful or spectacular as Niagara Falls but viewing them from the South Street Seaport was worthwhile this holiday weekend. The project, a creation of Danish Icelandic artist Olafur Eliasson consists of four towering waterfalls cascading down into the East River and New York Harbor. The towers, ranging in height from 90 to 120 feet, are located on the northern end of Governor’s Island, by Manhattan’s Pier 35, between Brooklyn’s Piers 4 and 5, and most dramatically, beneath the Brooklyn Bridge.

The falls draw water from the East River at a rate of 35,000 gallons per minute. Because of environmental concerns, the project had to navigate a Byzantine permit process involving 20 permits from 30 city, state and federal agencies and work from engineers, scientists, divers, riggers and environmentalists. Mesh-covered filters had to be installed at intake points to ensure that fish, other organisms and random East River garbage did not mix in with the waterfalls. According to attorney Ronald Daitz, of Weil, Gotshal and Manges, who served as volunteer counsel on the project, the project had unusual challenges including hiring an expert to screen for buried artillery on Governor’s Island, a former military base, now administered by the National Park Service as a National Monument.

The project’s cost, estimated at about $15m, was funded with money raised mostly from private donors by the Public Art Fund which is joining with NYC agencies and environmental organizations to develop resources for young people and adults to examine the waterfront through art, history, environmental responsibility, aquatic life, ecology, water conservation and other related subjects. The NYC Department of Education and the US Department of Environmental Protection have joined with the Public Art Fund to integrate a specially created curriculum inspired by the Waterfalls into New York City classrooms. The curriculum is expected to be released in August 2008. The waterfalls are scheduled to be in place through October 13.