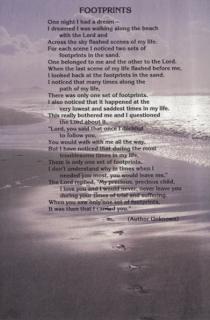 “Footprints in the Sand” has appeared on plaques, t-shirts, mugs and other merchandise sold in stores and online usually signed “Author Unknown”. With merchandising rights at stake, it comes as no surprise that a lawsuit is pending in a federal court on Long Island to decide just who wrote it.

On May 12, Basil Zangare of Shirley, N.Y., filed a 16 page complaint (password needed) under the Copyright Act of 1976, claiming that the words were written by his late mother, Mary Stevenson, in the 1930s and that she registered them with the U.S. Copyright Office in 1984. There are two defendants named in the suit. One of them, Margaret Fishback Powers, is a Canadian traveling evangelist. Powers says that she has a registered trademark for “Footprints” and “Footprints in the Sand” and that she wrote the words at a Thanksgiving religious retreat in Canada in 1964. She has a website marketing items using the poem. The second defendant, Carolyn Joyce Carty, claims on her webpage that she wrote the poem in 1963 when she was 6 years old and was inspired by poet Henry Wadsworth Longfellow. The poem was popular 20 years ago but has become less so today. According to the complaint, Zangare seeks more than $1 million from each of the two women as unjust enrichment.