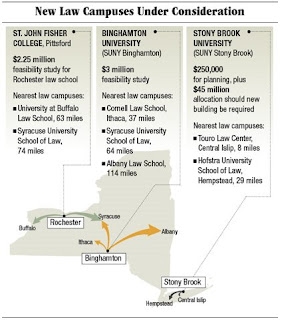 This past April, the New York State Legislature authorized nearly $50 million to help plan for three new law schools in Rochester, Binghamton and Long Island.. The money is for two feasibility studies: $3 million for the State University at Binghamton and $2.25 million for St. John Fisher College, a Catholic school near Rochester and $250,000 for the “planning” of a law school at SUNY Stony Brook. Finally, the Legislature earmarked $45 million for a Stony Brook law school building should one be required. With Brooklyn Law School, there already are 13 private and two public law schools in New York.

According to the American Bar Association, there are 198 law schools around the country approved by the American Bar Association, with nearly two dozen more accredited schools than 20 years ago. Law school enrollment, meanwhile, is up some 27,000 students from two decades ago, reaching an all-time high of 150,000 this past academic year. See the chart for enrollment statistics and degrees awarded for the academic years 1963 to 2007. In all, there are more than 1.1 million attorneys currently active across the United States, the largest number in New York, where more than 147,000 live and work.

A report in today’s New York Law Journal contains mixed reactions from the deans of law schools already existing in New York. For example, Dean Thomas F. Guernsey of Albany Law School said “It’s pretty silly. The demand isn’t there nationally, and clearly it’s not in the state of New York.” Dean William M. Treanor of Fordham School of Law said “What we’ve seen in recent years is that there is not a general need for new lawyers.” Other law school deans did not comment on the possibility of increasing the number of law schools in New York to eighteen.